South Africa, 2010. Venue for the greatest football tournament in the known universe. It was also the scene of a brutal crime which saw England die on the pitch. It looked even more horrendous in high definition.

There was only one good thing to come out of the world cup, for England fans at least, and that was EAs FIFA 2010 World Cup game. It had pushed the FIFA 10 engine on quite a bit, giving it a whole new lease of life.

And now we have FIFA 11. This means that weve now had three iterations of the same game in one year. And it shows.

Picking up the pad and firing up FIFA 11 is an eerie experience. If you have FIFA 10 for instance, it will check through all your data and carry it all over to 11. At first we thought this was quite clever  except for the irony that the game cant remember which language you play the game in as it has to be selected every single time you load the game  but then we started to get a strong sense of déjà vu.

You see were getting to the point in FIFA games where its almost turned into a spot the difference game. Its become the Jedward of the gaming world; theyre so annoyingly similar that you just want to bash their heads together really hard until they stop moving.

Many of the changes that were implemented in the World Cup 2010 game are also in this latest version. This means that the tweaked penalty taking system is in place. For the record, we hate it. The use of bars and power meters are all well and dandy for a golf game, but they have no business on the footie field. Its nothing short of a mini game within the game. Its all luck with its fastest-fingers-first mentality and no skill. Yes we despise it that much. 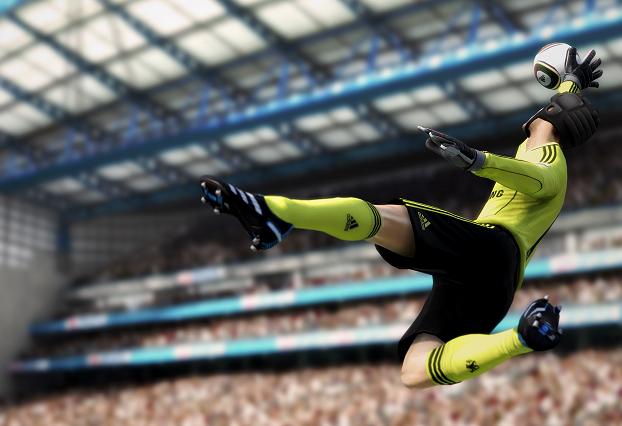 Seriously, I'm not sure how I managed in goal before without a trampoline. Wheeeeeeeeee!

Theyve also over-tweaked the career mode. Its unnecessarily busy, with emails from all manner of people now being sent to you; we were surprised that EA didnt include a spam mode for even more authenticity.

The real problem lies with loading times. Playing through a season, you can be left watching a calendar slowly cross off a day at a time until your next match. In real time this can take what feels like days; its a great time for a pee break though. And a spot of lunch. Perhaps even boot up the computer, watch a few hilarious clips involving small animals. And then a small walk...Its a crippling experience and one that needs to be addressed asap.

After a few games in career mode, we also started to notice a familiar pattern. Playing in World Class mode (look, were by no means hardcore FIFA players, but considering weve played virtually every version since its Megadrive days, we know our way around the game) we soon noticed that regardless of whatever team we were playing, they played exactly the same. Wolves were playing like Chelsea, Chelsea like Liverpool. It was if we were playing the same team over and over again. Talk about Groundhog day. Talk about Groundhog day.

Playing as Arsenal, we then took on Aston Villa in a cup game. We were about to lose 1-0 to a dodgy Heskey goal when our PS3 suffered a wobbly and crashed. We took this as a sign to change our tactics; we man-marked that goal lout Heskey (Vermaelen is no slouch in that department). We lost 1-0. To a goal by Heskey. Some may call it karma. We call it suspicious. Whats the point in implementing changes to the game if they dont change a thing? Of course playing World Class isnt supposed to be easy, but it doesnt mean that there shouldnt be any variety in the games. You know, like there is in real football?

Then there were the endless corners we had, with no goals scored from any of them. And the endless blatant fouls in the box, with not one penalty given. And how many times can Walcott be tackled down the line? Oh thats right, every time. It felt less hardcore and more hard luck.

Rather surprisingly, we found a certain amount of solace playing online. Not random games; everyone knows that nine times out of ten the team you play is Barca, and not only is that a painfully obvious choice, but it takes all the fun out of the game. No, we found ourselves enjoying the pro mode, as our created player, amongst a team of ten other strangers. As long as there are no ball hoggers, theres a real sense of teammanship, regardless of the final score, that provides a genuine thrill.

We [heart] FIFA, but we cant help but feel gravely disappointed with number 11. Perhaps, and we hate to admit it, were just a little footballed out. Maybe we dont need a new FIFA game every season. This version after all is really just a tarted up version of World Cup 2010. And we dont want a football simulation game. We just want one thats fun to play. Like the good old days. So EA, can we have our ball back please?