As an exclusive for the 360, the Forza series has been tootling about minding its own business for a few years now. Its last iteration Forza Motorsport 4 was a great little run-about, and although far from outstanding, it was a joy to play.

Forza Horizon is not Forza 5; in fact it's seen as a spin-off from the main series and it's easy to see why. As the title suggests, this game has opened up its horizons and takes place in an open-road environ known as...Horizon.

Driving around Horizon is an eerily familiar experience; it's a town that should really be twinned with Paradise City, that featured in Burnout Paradise.

The game starts in a worrying fashion; you find yourself in a fast car and having to race another car from the off. The handling on this vehicle is very Torvill & Dean, slipping and sliding as it does on the road.

Thankfully, this is just an intro into the Horizon world; soon after you get to pick a car of your choosing and the game begins to get itself into gear.

Although it's an open-road type of game, you don't have the tedium of traffic lights to stop at to begin a race like that of Burnout Paradise. Your map shows you where races are available, so if you want to participate, you can set a route on your sat-nav and follow the directions to the start point. 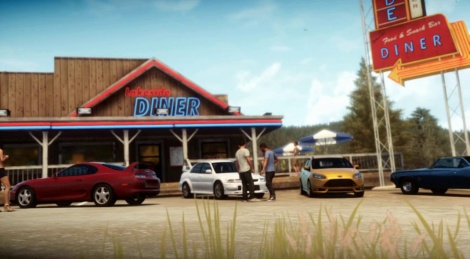 Driving around and around an open world really makes me hungry. Curly fries here we come!

At the heart of the game is a hub; this is the central base where you can buy new vehicles, splash out on a paint job etc. It's very similar to hubs featured in other driving games, but that's par for the course these days.

The main way to progress through the game is to win wristbands; each band won will open up another selection of races to enter, with the difficulty level raised a little higher than the last.

But as you can expect, the open-road nature lends itself to other driving experiences. There are a myriad of discount signs to run over, for instance, which will help reduce the cost of buying parts for your cars. There are also barns that need to be hunted for, as they hide a classic car within: discover the barn and the car is yours.

And there are also races that can be started against other racers outside of the designated circuits. If you approach one of the game's racers from behind, you can then be given the option to race one-on-one against them. One of the things you will notice when doing so is that on open roads, there is oncoming traffic to contend with. As most of the cars handle fairly well, this isn't too much of a problem.

As you may have guessed yourself, Forza Horizon is the gaming equivalent of Tapas; it takes a little from every other driving game out there and although the sum of its parts aren't particularly original, what's on offer is more than satisfying.

It's clever how it imports the cars you bought from Forza Motorsport 4 into the game too, which is genuinely a nice touch.

Casual drivers may find the upgrading system a little annoying; luckily it gives you the option to let the game do it automatically which is a blessing, but if you like driving the one car, you may find yourself upgrading and degrading all its bits and pieces over and over. It would have been nice to be offered an alternative, which you could purchase, say from the hub, which would get the job done. Instead there's some faffing involved, that if you're not a petrolhead, may just drive you a little bonkers.

The multiplayer side of things is nicely done too, especially as there's a level for beginners only to find their online feet.

Horizon itself is a nice place to go for a drive. Once you're out of the central town areas, the game shows off some really picturesque lighting effects, as the game cycles through days into nights. The scenery is all very pretty, if a little samey after a while. It would have helped if there was some variation in the weather, but it's always sunny and dry in Horizon, somewhat annoyingly.

Still the radio selection is a step up from Forza Motorsport 4, which is a relief, with a pleasant variety of stations and tunes on offer.

It may well be a departure for the Forza franchise generally, but Forza Horizon offers nothing new compared to other driving games. That said, it's a real challenge to complete everything on offer, with a nice mixture of behind the wheel action to satisfy any driving fan.