Although a new Bond film may be some way off on the horizon, it hasnt stopped Daniel Craig from using his license to kill. Not only has his likeness starred in the new Bond game adventure Blood Stone, but hes also filled Pierce Brosnans shoes by playing Bond in the remake of the N64 game Goldeneye.

Thinking about it, remaking older games makes far more sense than films; after all, where anyone can pick up the original of a film on DVD, if you dont have the original console the game came out for, you cant play the game. But regardless of what kind of remake youre going for, the same rule applies to all: you better make sure that what youre re-making is as good as the original  if not better  otherwise dont waste our time.

Rares 1997 game is, quite rightly, considered a classic. Not only was the single player a solid first person shooter, but the multiplayer became the template for all great multiplaying modes to come. So, no pressure then.

Thankfully, developer Eurocom have not only had some experience with Bond games in the past, but the game engine used here was modified from their tasty 2009 Wii title Dead Space: Extraction.

Although the plot is roughly the same as the original, Bruce Feirstein  whos actually written the screenplays to a couple of real Bond flicks  has given the games script a modern makeover.

Visually it doesnt look all that different; the Wii is hardly the most powerful console on the market, so although it might not exactly be a high definition update, it doesnt do too bad a job. Besides, its difficult to make an underground bunker really stand out. 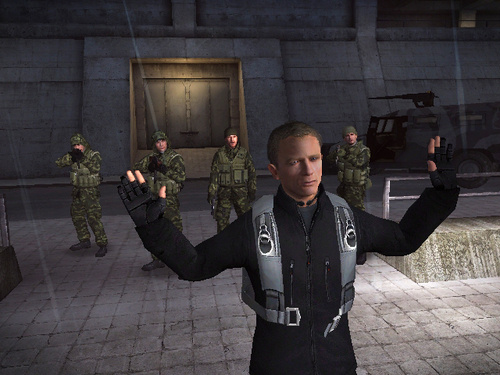 I don't know about you guys, but I'm getting a serious sense of deja vu.

The story is suitably familiar to anyone who has played the original, with one or two key scenes that will certainly get the nostalgia pangs going; remember the first time you crawled through that air vent and landed on someone whilst they were in a toilet cubicle? Ah, happy days. Who would have thought that such an action would have been so joyously memorable?

The first major dilemma youll come across playing this is which controlling method to use. In fact the only way that you cant play is with the Wii board (you know, that lump of plastic sticking out from underneath the sofa). You can use the Wiimote and Nunchuk either in your hands or in the Wii Zapper; the Classic Controller Pro; or plug in a GameCube controller/Wavebird. After finding that using the Wiimote and Nunchuk method was way too floaty, the GameCube controller was plugged in. It may have a wire running out of it but within seconds it felt like coming home.

First person shooters have come a long way since Goldeneyes original release, and yet the basic premise is still essentially the same: run and shoot. Oh and try not to get shot at. The only new thing added to this update is the ability to jump over small objects or through windows; its nothing major but its a nice touch.

It wouldnt be a Bond game without 007 getting a fair few stamps in his passport. The locations are varied enough; with the usual chilly conditions of Russia to contend with, as well as jungles, remote industrial plants etc. One of the stand out levels sees James in a disco. Unfortunately though, he hasnt been issued a license to dance.

The game has replay value too, depending which difficulty level you play through. Not only do higher levels have more baddies to contend with, but youre also given extra objectives to complete.

So what of the multiplayer we hear you cry? Well, quite simply, its a blast. The maps are varied enough in theme and size, and there are a decent number of ways to play. You can go split screen with up to four other players in the comfort of your own home, where you can enjoy various modes including classic Paintball.

Otherwise you can play online: its slightly restrictive in that you can only play with up to eight players, but you have to be thankful for what you get owning a Wii. Besides, there are enough modes to keep the most hardcore of FPS players quiet, as well as a ranking system you can climb up by earning XP points; its not in the same league as your CODs, but its still got a lot going for it.

Its not so much the whole re-make thing that this title has over Blood Stone, its simply a question of more fun. Whether you played the original or not, this is one of the most enjoyable FPS titles for the Wii. Okay, that might not be saying much, considering the consoles lack of FPS titles, but Goldeneye is quality through and through.

With a strong single player campaign and a balanced and well thought out multiplayer, this is Bond back to his best. Like they say, nobody does it better.