Good Luck to You, Leo Grande

Just when you thought you knew a person. You might think that’s in reference to the two-time Oscar winning Dame, Emma Thompson, who reveals all in her latest role. But no.

Some actors just can’t do any wrong, and you would certainly consider Thompson to be one of them. But that’s not quite the case; in 1988 she was given her own TV show on the BBC, appropriately titled Thompson, that was a mix of comedy and music, that also featured friends Kenneth Branagh and Imelda Staunton. With that kind of cast, what could go wrong? Well, something apparently did, as it only lasted six episodes and was far from being well received, so was swiftly dropped.

It hasn’t stopped Thompson however, thank goodness, who has gone on to have quite the career, which she continues with her latest film.

I'm sorry but I have a phobia over hospital corners.

Around two years ago, Nancy (Thompson) was left a widow when her husband died. They had been married a number of years, had two children, but there was a lack of intimacy between them, with their time in the bedroom being somewhat perfunctory.

Now, in her mid fifties, she wants to feel something. She’s not interested in a relationship, she just wants to have sex.

So she decides to hire sex worker Leo Grande (Daryl McCormack) and meet in a hotel room.

He is a young, handsome Irishman, who appears to know what he’s doing, which intimidates Nancy somewhat. As they spend more time together, in the same hotel room, they begin to learn more about each other, more than either we’re really prepared for. 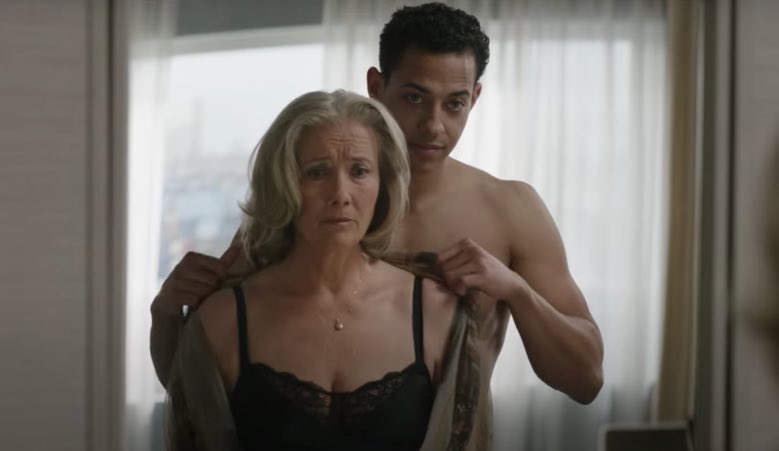 I think this might be taking customer service a stage too far.

For the most part, this film is what they call in the business a two-hander. It’s the kind of thing that would translate well to a small theatre, with just a simple bedroom set with the two characters. That said, it still works well for the screen.

As you would expect, Thompson is in excellent form, playing a woman who wants to feel the physical pleasure from having sex. It’s a role where she’s prepared for a fair bit of nudity, which is brave for any actress at any time of their career. No doubt it was as liberating for her as it is for her character.

Then you have McCormack, who could easily charm the panties off of, well, Emma Thompson. It must have been a daunting task, not only sharing the screen with a national treasure, but all also baring all at the same time, as it were. He excels however, being the perfect foil for Thompson.

Although the underlying theme is of a woman finally discovering her sexuality on her terms, the meetings between the two comes across as a sort of couples therapy, as they take turns in revealing parts of their life to one another. In that sense, it has echoes of Nick Hornby’s State of the Union show, which sees couples in discussion before going into a therapy session.

Comedian and writer Katy Brand’s script is beautifully crafted, sharply observed, brimming with wit and charm, warmth and vulnerability. It’s also heartening to see a film with an older female protagonist at its centre, exploring her sexuality; we’ve just seen the release of Pleasure, which does a similar thing, albeit with a young and extremely attractive woman, which is more marketable sadly, so it’s refreshing to see a character that will be far more relatable to many.

And yes, it’s a film about sex and not about love, but it’s told with honesty and good humour, that will leave you wholly satisfied.