Balls. That was the overall impression many people felt after playing Segas recent Virtua Tennis 2009. It lacked any sense of challenge, with its endless serve-volley-win games. No one thought that EA, of all people, could breathe life into this seemingly tired genre of gaming. But EA in recent years have, more than most, got their proverbial act together. And its classic slogan of EA Sports - its in the game has never rung more true.

The first thing that will grab you is its cutesy, cel-shaded graphics. And although the game contains many of the top players  both past and present  theyre represented in a kind of bobblehead fashion. Dont let its cartoon-cuteness fool you though, because beneath them lies an incredibly challenging gaming experience. 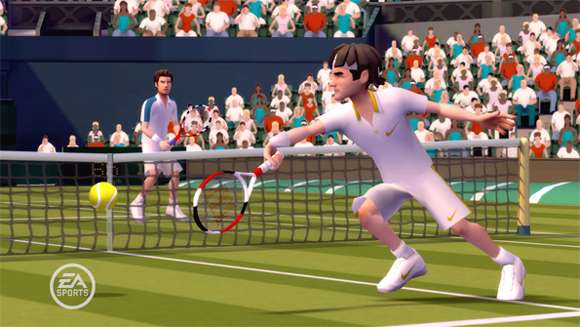 Look at me, I can beat you and moonwalk at the same time.

Although it can be played without, its recommended that you play with the latest MotionPlus attachments. The reason is simple  a greater level of control. Perhaps even a tad too much. You hold the wiimote like you would most games, and although it doesnt feel like youre holding a racket in your hand (it would have been more comfortable holding it on its side for that), it tracks your movement swinging it as if you did. So forehand and backhand shots are played exactly as if you did have a racket in hand. On top of that, you can also add slice and top spin if you angle the wiimote, and play lobs and drop shots holding down the A or B buttons respectively.

If you want to concentrate on your racket skills, you can allow your characters movements to be controlled by the Wii. However, attaching the nunchuk gives you complete control. It will take some getting used to though, as youll no doubt swing your wiimote around so wildly to begin with, theres bound to be some clashes  and some lost points because of it. Persevere though, and youll soon find yourself getting into the swing of things.

Now having played other tennis games before, we decided to skip the easy setting and get to grips with medium. Big mistake. To begin with, this is no pick up and play game from the off. Not only does it take a lot of time getting used to the controls, you then have to learn how to play against AI players who really dont enjoy losing. Even then restarting a campaign on easy was far from that. If you want to be good, you will have to work for it. You have been warned.

But once you have found your rhythm and form, Grand Slam Tennis is a pleasure to play. You can be as technical a player as you want, or simply swing hard and fast and hope for the best. 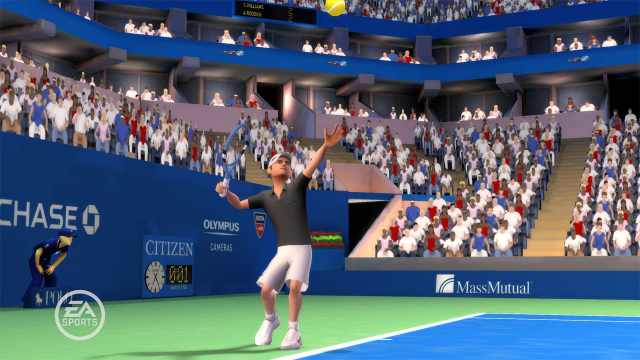 Hey, cut dangling that ball in front of me on a piece of string, I'm tryin' to hit the thing!

The best way to improve your skills is to join the Grand Slam tour. Firstly you will have to play an exhibition match with someone with your skill level. Then you have a Legend Challenge to contend with, where you face a tennis champion; if you beat them, you win a relevant ability, either to bronze, silver or gold standard. There are seven to be won (speed, forehand, backhand, service, hustle, fitness and net/volley), but your character can only have three at time, so you have to work out what your strengths are.

You will then have a final test to face in the skill challenge. These are the weakest part of the game, with what are ostensibly, mini-game challenges, usually played in doubles, which just slow everything down.

Then its down to the nitty gritty, the tournament itself. Win all the games and youre crowned the winner; lose at any time and...well, its on to the next tournament. If you manage to win all four major tournaments in one season, you will then be crowned a Grand Slam Champion.

As well as abilities, you also pick up gold stars for your technical improvements. Theyre not just handed out willy nilly though, youll have to earn them.

EA have done a great job with the online side too  despite Nintendos awful Friends Codes system. You can play either ranked or unranked matches. With ranked matches, you represent your country, gaining and losing points on behalf of it, depending on the outcome of your game. Ranked matches are mostly played by pro-like players, who appear to know every trick in the tennis book. It can be fierce and strongly competitive, so will certainly push your skills to their limits.

With this entry into the world of tennis, EA could have another EA versus... match on their hands again, but instead of Fifa VS PES, it could be Grand Slam VS Virtua. The problem is, EA has already served a solid ace with this game, of which there may well be no coming back for Virtua. Its that much of a drubbing.

If you enjoyed tennis on Wii Sports but fancy a tennis game with more depth, then Grand Slam Tennis is your natural next step. It is certainly more challenging, but not only does it come with its own rewards, its also immense fun to play. Game, Set & Match.