Start the day with a drink, go play a round of golf, take the car for spin to the shore, then steer the boat out onto the ocean as the sun slowly sets in the sky, before doing some drugs and heading off to a strip joint to have a pair of tits rubbed in your face: welcome to Los Santos.

The mother of all open world games returns and it's bigger than ever. For 2008's Grand Theft Auto IV, the scene was set in the fictional east coast Liberty City. For this latest instalment, we move over to the west coast, to the LA inspired Los Santos.

It's an incredibly rich and detailed locale. So much so that taking in the sights can easily detract from the single campaign; in fact you could still manage to enjoy the game without ever touching the single player. And what's more, there's another location included, to the north of the city, which is a far more rural landscape to explore; it's here that you can fly, go hunting or even kidnap locals and drop them off at a scary-looking cult. 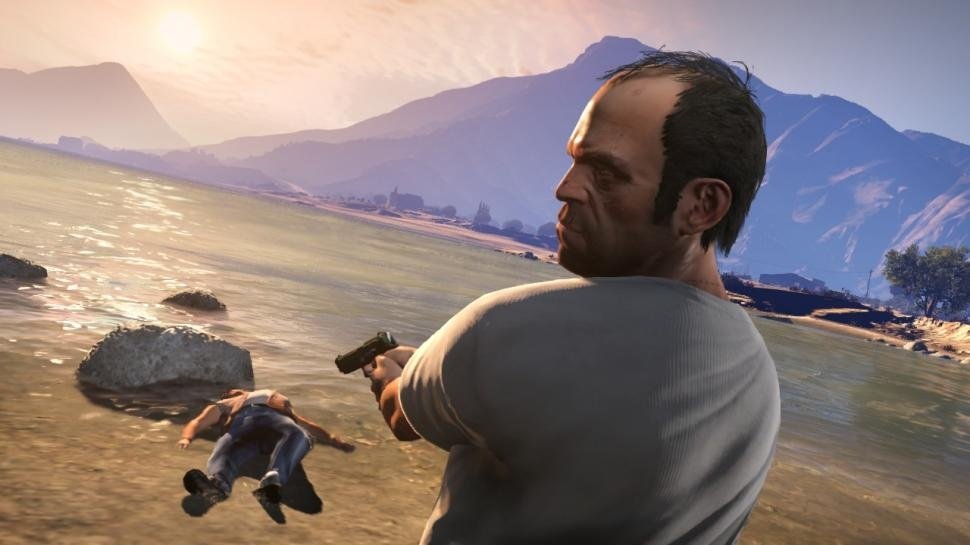 When I said to him he was a dead man if he added milk to my coffee, I think he thought I was joking.

But the game isn't just bigger, it's better. The biggest improvement is the ability to play as multiple characters instead of the solitary one. To start with you play as Franklin, a youth who wants to make a buck or two. He helps out as a repo man from time to time, but he wants to make more money than that.

His path eventually crosses that of Michael, a middle aged man with a disgruntled wife and two disinterested kids. Franklin agrees to help Michael out when he finds that his wife is sleeping around. It turns out that Michael isn't quite who he says he is, as he's certainly a man with a past. Actually, he's in witness protection and was involved, some years previous, in a criminal underworld. With Michael now needing some real cash quickly, he allows Franklin to join his crew.

Meanwhile, the highly unstable Trevor, who believed his partner in crime Michael to be dead, learns that he might be alive after all. He heads off to Los Santos where he catches up with his old pal, and the wheels are soon in motion for all three to work together for some serious criminal activity.

The fact that you can now play three very different characters, and switch between any of them on the fly, is a huge step forward for the franchise. No longer are you following the path of one character throughout, but juggling three, whilst still enjoying the ability to drop out and simply do your own thing, with any one of them, whenever you want.

For us, we've never really been that enamoured with the GTA franchise; although it's easy to recognise its vast technical achievements, its structure and game-play have always left us cold. GTAIV was a particularly underwhelming experience. Not so here. Where Niko Bellic was a truly dull individual, the triumvirate of characters here are all strong and interesting individuals. Trevor, in particular, is a fantastically nasty piece of work, whose unbelievable antics never fail to amuse and astound.

It also allows interaction from all of them to get particular missions done, which means that there's never a dull moment.

Although the basic mechanics are still very much the same  you steal a car, you try and lose the cops, you shoot the cops, you go hurtling over a cliff which you forgot was there, to your certain death  it's the story in general and the script specifically that make this easily the best Grand Theft Auto title yet. It's sharp, witty, dark and intricate in every detail.

But of course if you need a break from the main campaign, you can always go to the flicks and catch an art house film, or go take some flying lessons, or play a game of tennis or two, or take part in a street race etc, or simply just pull over and watch quite a remarkable sunset. 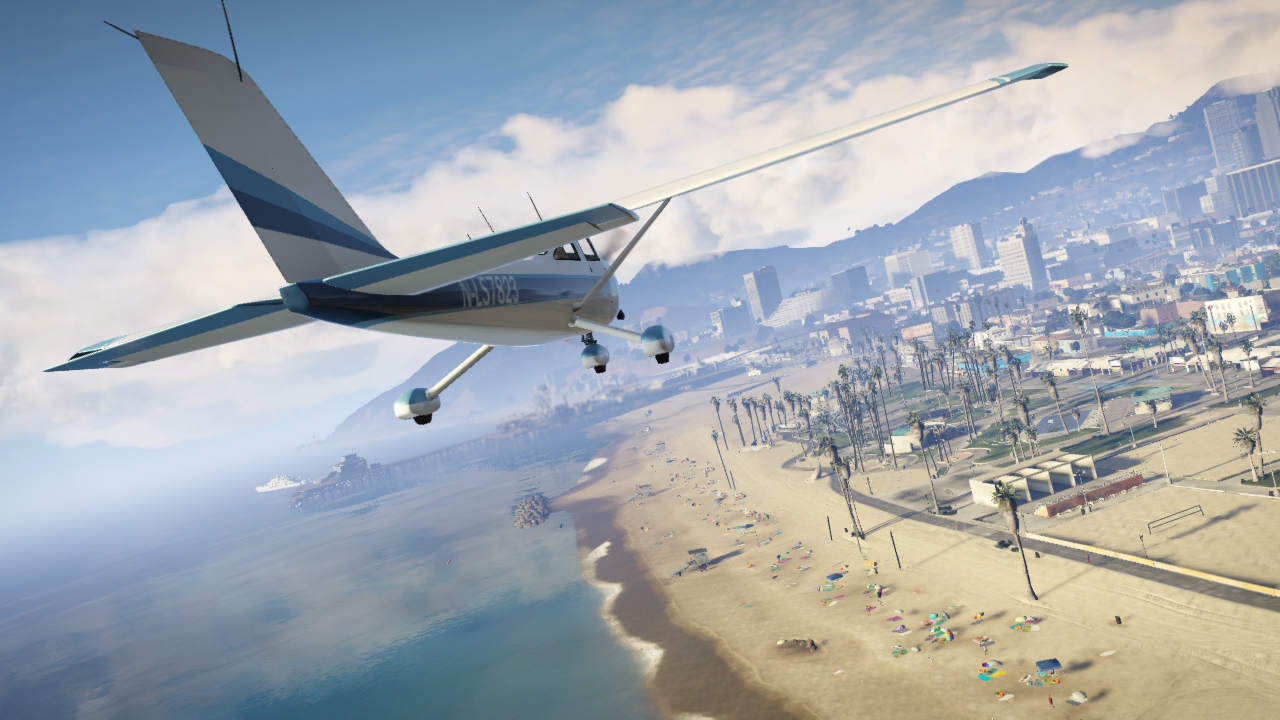 Ladies and gentleman, we will soon be arriving in Los Santos. Make sure to leave all your valuables on the plane - they're a bunch of thieving bastards down there!

It wouldn't be GTA without causing a ripple of controversy however. Some may have a problem with the level of violence in the game, but the truth is it's no more violent that previous titles. It is disappointing to see that the titular element are still in place and that if you pay your money, you can be 'treated' to a lap dance with a fair amount of nudity on show. Perhaps Rockstar should consider a female character to play in a future instalment, and make it compulsory to go to a bar and have men rub their bits in her face for equality's sake. Now that would be controversial.

One of the most ironic things about this game, and the series as a whole, is that it has to be the most successful Sims game of all time. Let's face it, that's what GTA is; sure it has criminal leanings, but essentially it's a massive, open world sim game, so it's not quite as street as everyone would believe it to be. Particularly when you consider that you can practice yoga in the game, in an attempt to relax more.

We left it a while before sending our review into the world, as we wanted to include the multiplayer side of things that went live later than the games release. But, as has been widely reported, Rockstar stumbled magnificently getting the game online. Maybe their servers really weren't ready for the brutal seeing to that they suffered, but what they managed was embarrassing.

Having spent some time with it almost working without a hitch, you can see that it has potential, but there are far too many creases that need to be smoothed out before it can be seen as anywhere near cohesive. It doesn't help that a number of gamers are just keen to go around and shooting you, with their narrow FPS vision, which certainly doesn't help. Doesn't practicing yoga teach them anything?!

There's no denying that the hugely enjoyable heist elements online  which allow you to participate in the kind of criminal activity you get a taste for with Franklin, Michael and Trevor but with a multiplayer twist  have the ability to certainly extend the life of the game way off into its glorious sunsets and beyond in a pretty impressive fashion. So taking on board the extensive and exhaustive single player campaign, makes this a game that definitely keeps on giving.

If you strip the game down, it is simply a structured mission-based game: get in car; follow baddies, shoot baddies, lose the cops. All of the momentum from the single player game sets you on a very narrow path. What sets it apart is the story, the development of characters  as well as the fact that you start to feel connected to these characters, which is kind of worrying where psychopath Trevor is concerned  that all helps to make this one of the most cinematic gaming experiences of all time.

With this current gen of consoles just about to bow out, GTAV will stand out as a truly impressive accomplishment for all concerned. It may not be a game changer, but what it set out to achieve, it clearly surpassed. It also sets the bar remarkably high for the next instalment on the next-gen.

Until then, you can just hang out in Los Santos and enjoy all of its many splendid sites. And yes, have a lap dance or two if you're that way inclined. But just remember this: yes, it can make you go blind.