There must be something pretty special about Haddonfield, Illinois; despite there being a notorious serial killer on the loose, one with a penchant for pointy cutlery and babysitters, town folk are more than happy to stay there.

They’re clearly missing a trick by not promoting Haddonfield as a tourist attraction – home of the boogieman – which would no doubt go down a treat with morbid tourists, and probably make a killing for the local economy, as it were.

This sequel then, which picks up exactly where 2018’s Halloween left off, sees Michael Myers continue his tour of his home town, sharp knife in hand. 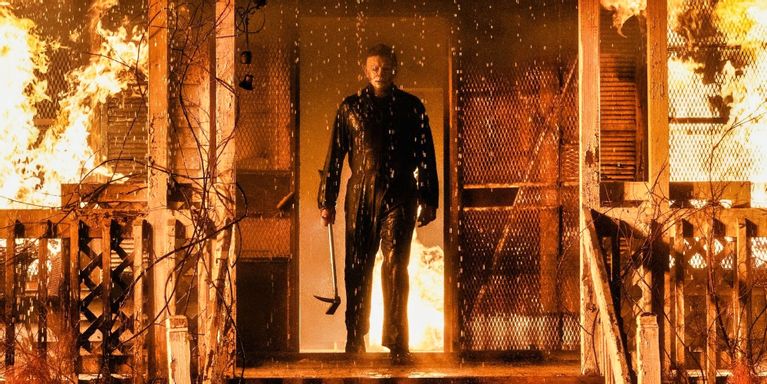 Hey come on in, the party's just warming up...

Michael Myers (James Jude Courtney) is dead. Finally. Or so Laurie Strode (Jamie Lee Curtis) thinks. There’s no way in hell that he could have escaped the burning trap that she and her family had set for him.

Imagine her disappointment then, when later she is informed that, well, the boogieman is still alive.

Having haunted the town with his evil for so many years, the community, lead by local Tommy Doyle (Anthony Michael Hall), feel that enough is enough, and that they are going to have to take matters into their own hands and destroy the monster themselves.

The thing is, Halloween is a pretty big deal for Myers, who enjoys nothing more than doing the rounds in his home town, getting reacquainted and very hands on with the townsfolk on what is his favourite night of the year. 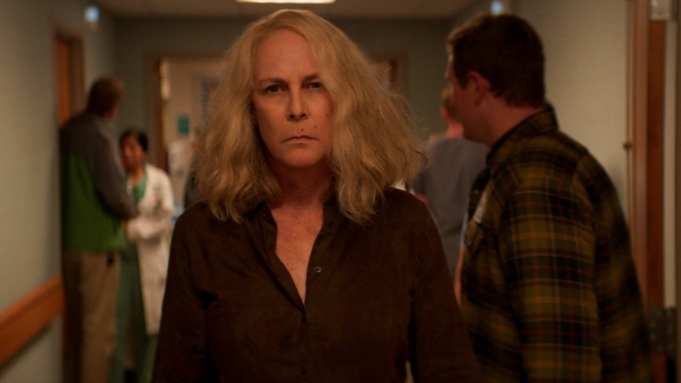 It’s obvious from both their 2018 film and this direct sequel, that writer and director David Gordon Green and his writing/producing sidekick Danny McBride, have a fondness for the source material. Much as they did with the previous film, this one continues the reverence to John Carpenter’s classic 1978 original, by not doing anything too outlandish with the franchise. And therein lies the problem.

With Myers being somewhat of a homebody, as well as making his return on the same night of the year time and again, there’s little room for originality in this déjà vu of a franchise.

Green has changed the perspective somewhat, or widened it at least, so the focus isn’t entirely on Laurie, played by Curtis, or her immediate family, all the way through. Instead we get more of a flavour for the local community, which is certainly welcome, as it introduces us to the likes of Big John and Little John, who are a pleasing addition. As are the couple who enjoy playing with a drone in their house, who, on their small appearance alone here, deserve a spin-off HBO series of their own.

But introducing these characters, as well as others that are recruited to hunt down the boogieman, the film suddenly feels top heavy, being more about them than the headline act of Myers himself. This gives the script a feeling of drudgery, making it hard work at times, as if it’s treading blood-stained water. The script’s boggy nature also isn’t helped by the film’s running time, that although isn’t outrageously long at an hour and 45 minutes, you start to feel every single one of them from the mid-point onwards.

It’s a shame because when Meyer’s is in the spotlight, doing his slasher thang, the film is deliciously gruesome, as he dispatches the good people of Haddonfield with old school aplomb.

It should also be mentioned that it has a cracking soundtrack, created by Carpenter, which is truly intrinsic to the film’s horror milieu, and enhances the overall experience greatly.

With a further instalment due from Green and McBride, with Halloween Kills due for release around this trick or treat ‘holiday’ period next year, there’s the hope at least, that they can concentrate more on what audiences want from the series, which is squeamish kills, and really stick the knife in.