How to Build a Girl

After blowing every member of the cast away in 2017’s Lady Bird, and then delivering the funny big time in 2019’s hugely enjoyable Booksmart, Beanie Feldstein has shot to fame in rapid fashion, and deservedly so.

For her latest role however, she has decided to really push the boundaries of her talents, by getting completely out of her comfort zone; not only has she left the cosiness of Hollywood behind by slumming it shooting in the UK, but possibly takes on the greatest challenge an actor can ever face – the Black Country dialect. 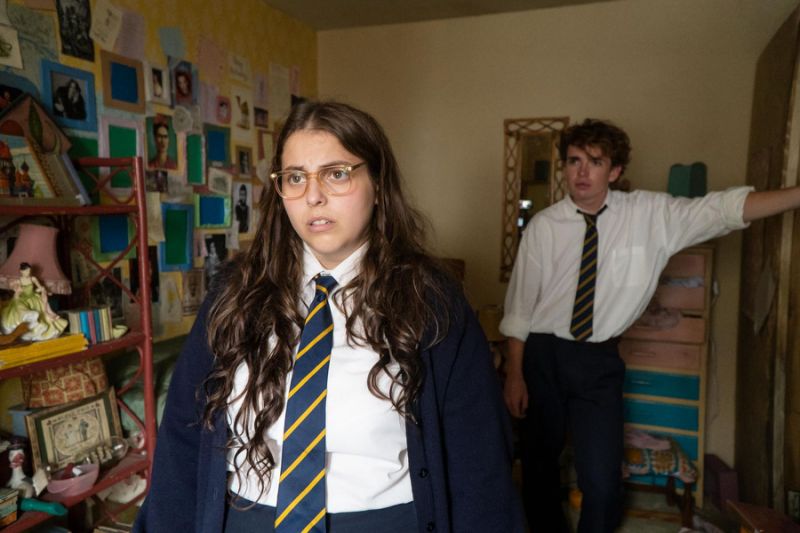 The first day back at school after the summer hols was a difficult pill for many to swallow.

Living in a working class suburb of Wolverhampton is teen Johanna Morrigan (Feldstein). She has a passion for writing, mostly poetry, and is frustrated that the world has yet to fully appreciate her scribing abilities.

After being picked to read out one of her poems on TV, she thinks this is the opportunity that she’s been waiting for. The experience doesn’t go as planned however, with her appearance ending in ridicule.

Feeling dejected, it’s up to her brother Krissi (Laurie Kynaston), to lift her spirits, as he pushes her to change direction in her writing, and recommends music journalism.

So she decides to write a review for something she listens to at home, a famous show tune, and submits it to a music mag in London. Although viewed as a joke by all the staff, Johanna is given the opportunity to review a band live. It is a job that not only sees her first tentative steps into the world of journalism, but also into womanhood.

Now this is what I call public transport.

There are simply some challenges that actors, regardless of their talent, cannot overcome. It just so happens that US actress Feldstein is unfortunate to face two in one project. The first is for a 27-year-old to play 16; she may well be fresh faced, but not to the extent that she can play ten years younger than her actual age. That’s not wholly relying on the magic of cinema, but that of a bona fide miracle, which sadly for Feldstein, does not materialise here.

The second is for said US actress to submerge herself vocally in the murky tones of the Black Country. For those unfamiliar with the dialect – lucky you – think an ugly twist on the already unattractive notes of Peaky Blinders. Her attempt at the accent is akin to rubbernecking a fatal accident in slow motion; the words violently exit her mouth, sliding uncontrollably in all directions, before making a terminal impact on your ears.

She gives the role a really good go, full of exuberance and fun, but ultimately it’s a role that is truly not for her. As you watch her painful performance on screen, all you can think of is who would have been perfect for the role. That person is the star of the short-lived C4 TV series Raised by Wolves Helen Monks, who essentially played the same character, as both this and that show were written by Caitlin Moran, with both focusing on the semi-biographical part of her early years. The difference being that Monks’ version feels more accurate, whereas Feldstein’s is more of a trippy, warped parody.

Now it’s obvious why everyone concerned with this project were keen to have Feldstein on board, she is a bright, rising star, and will already have an audience attached. And although her part in this doesn’t entirely kill the film, it’s certainly an attributable nail in the coffin.

This also brings up the issue of the fact that we’ve kind of already seen this story before. Raised by Wolves focused on a quirky family from Wolverhampton in the nineties, that were far from conventional. This film does that too. However, it also goes on to delve into the early stages of her career, which unfortunately, just isn’t as entertaining as the stuff at home.

You get a sense that British director Coky Giedroyc (yes she is related to Mel, she’s her sister) had an inkling she was in trouble here, as she ropes in a number of pointless cameos from (no doubt) British chums (yes, including sis Mel), including possibly the most redundant screen cameo of all time by Emma Thompson, in a bid to gain the attention of an audience. As if the words painfully stumbling out of Feldstein’s mouth weren’t enough.

The point has also now probably been reached that it feels as if we know Moran’s true-ish early years far better than we needed to. Sure it was chucklesome, but enough is most certainly enough now.

Feldstein was definitely brave and bold to take on the part, but this must go down as a spectacular fail. What’s guaranteed is that she will bounce back, and a lesson will most certainly be learnt, with the most obvious one being leave the Black Country accent well alone.