There must be something in the DNA of funny men that drives them to have an audience see the unfunny side of them.

Simon Pegg has made a career out of being a comedic actor, but has clearly an urge to be seen as more rounded, and certainly more dramatic. Here he once again teams up with Fellow Brit Vaughn Stein, whom he worked with, alongside Margot Robbie, for the director’s atmospheric directorial debut Terminal, to go even darker for his second feature. 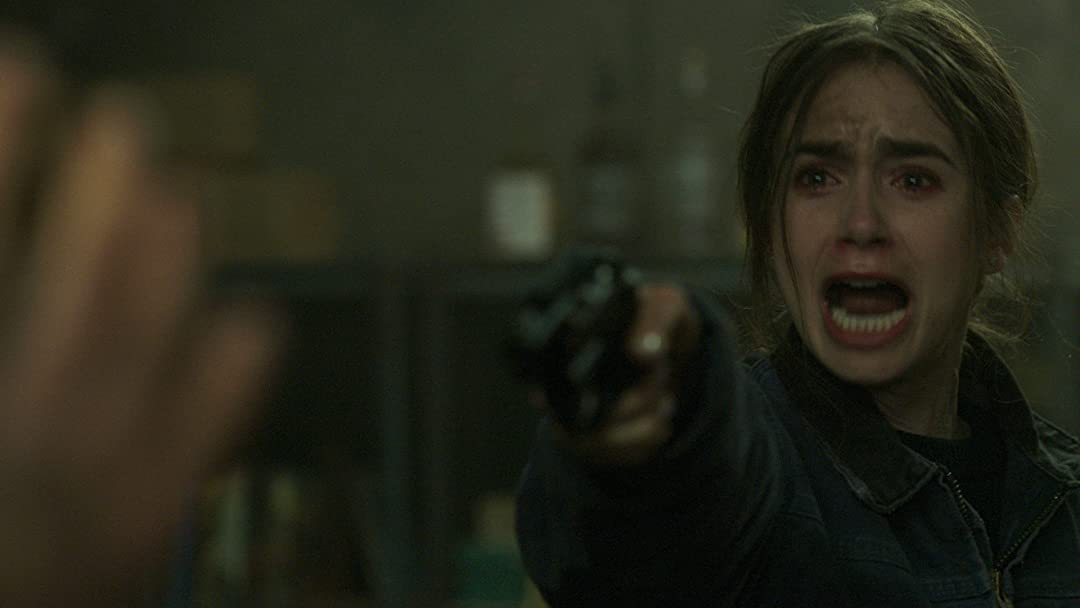 How dare you say that gorilla is a better drummer than my daddy - take it back!!!

The Monroe’s are one of those wealthy New York City families that don’t just have the money, but considerable power to go along with it. William (Chace Crawford), is keeping his father Archer (Patrick Warburton) very content, by pursuing a career in politics, which now sees him keen for support during his re-election campaign.

His sister Lauren (Lily Collins) however, is almost considered the black sheep of the family, choosing a career in law and becoming a DA, in a bid to defend the innocent.

The whole family suffer a huge blow however when Archer dies unexpectedly. This leads to the reading of his will, where he leaves the majority of his estate to his son. In comparison, Lauren is left with pittance, which she is far from surprised by.

What she doesn’t see coming however, is that her father has left her an envelope, with almost cryptic messages inside, which lead her to an unknown bunker in the back of their large garden. In it she discovers a man, barely alive, chained up. His name is Morgan (Pegg) and he has lived in the bunker for over thirty years.

After some negotiations, whereby he finally gets a decent meal, he agrees to tell Lauren what her father was really like, and eventually tells her of the events that led to him being kept prisoner all of these years.

With the conclusion of some investigating of her own, Lauren starts to think that much of what Morgan has to say appears to be true. This leads her to consider some tough questions: was her father really as cutthroat as Morgan is making him out to be? And the biggest one of all, what is she to do with Morgan now?

You'd be honest with me if you thought I looked stupid right? I'm going for menacing, really I am.

With his debut Terminal, Stein showed a lot of promise. Sadly all of it evaporated instantly with the release of this boorish effort.

For the first half it desperately attempts to resurrect the dynamic of Hannibal Lecter and Agent Starling; there’s a white line in the room that represents the glass that separated those two characters, as Pegg’s Morgan endeavours to channel Anthony Hopkins’ Lecter, in a bid to get under the skin of Lauren. Unfortunately for Pegg, his effort to imbue a similar menacing gravitas fails dismally. Everything about him is less Lecter and more Worzel Gummidge.

It’s a peculiar performance, mainly as Pegg struggles to find a rhythm to his character. He’s certainly not helped by some below par dialogue, that doesn’t do him any favours.

As for Collins, she does little wrong as far as her character is concerned, and probably does all that is asked of her. The overriding problem is that the character herself is dull and two dimensional. Again, the script refuses to dig her out of the horrid hole she finds herself in. After building up a case for her character to actually be an upstanding, law-abiding citizen, she’s swiftly confronted with a man in her garden who she decides to just leave there. And it just gets sillier from there.

And as for Stein, his direction is flat and uninspiring, undoing all of the good work from his creative debut. He strings out an absurd plot for a ridiculously long running time, that only makes things painfully worse the longer it drags its heels to the finishing line.

As far as Pegg is concerned, the only terrifying element regarding his character is that how he saw fit to commit to such a woeful, dud of a project in the first place. And that’s certainly no laughing matter. It was clearly a project he was passionate to do, but is now certainly haunted by deep regret, as audiences will be if their unfortunate to catch it.