With Oasis no more, the door is well and truly open for another Brit band to stick their foot in and claim the coveted top spot. Very much in the running for this prized title has to be Kasabian; their last album The West Ryder Pauper Lunatic Asylum proved that this five piece had it in their musical genes to reign supreme.

This creative cretaceous offering finds the band in a firm stride for their fourth studio album, albeit one that isn't afraid to embark in different directions. 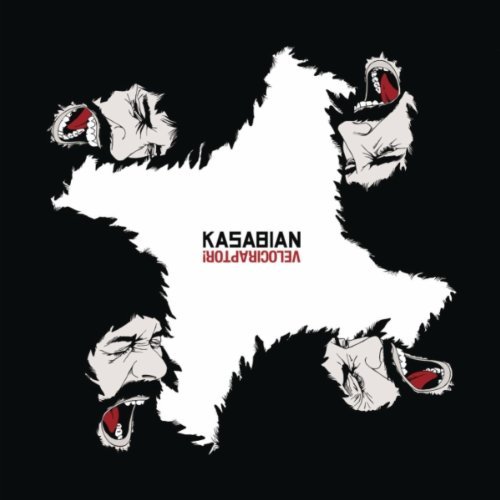 A loud gong, which you could easily imagine the man from the Rank films logo banging, announces the commencement of this album in sombre style, acting as the start of 'Let's roll Just Like we Used to'. A dreamy horn then links to a groovy rift that has a touch of a Bond theme about it. Tom Meighan sounds like he's having fun singing this song, stretching out the lyrics as he does with the elasticity of a rubber band.

The first single 'Days Are Forgotten' weighs in next with the band's trademark beats. Playing co-star to them are some mad wailings that perk up throughout. When the screams subside however, there seems nothing of any real substance left, despite some tight production in the mix.

Soft. Not a word you would normally associate with the band. And yet 'Goodbye Kiss' continues the retro theme, but this time in ballad form. Tom's vocals are brought to the fore, as if he were fronting some sixties band. It's all a little too Laura Ashley to impress though, and feels slightly wrong.

This time warp sensation continues with the floppy 'La Fee Verte'. Hippy + Drippy = this track. The strings make a nice bow to a lullaby-esque tune. It's certainly Beatles influenced, but it's unclear whether that's a good thing or not.

Then out of nowhere swoops the ferocious eponymous track. It's a beast of a tune and is Kasabian TM. There's still a hint of days gone by, but it's the beat that kicks it into touch. It's a blast of bold, which is missing elsewhere here.

'Acid Turkish Bath (Shelter from the Storm)' certainly makes a grandiose entrance, hinting at the prospect of something impressive to come. Sadly, it doesn't. The Middle Eastern vibe is pretty enough, but like other tracks here it spends a little too much time swaying gently from side to side in a harmless breeze. Still, it has a hint of menace lurking in the background that just about maintains its air of mystery.

Anyone who recalls the theme tune to the beeb's The Computer Programme, which was supplied by Kraftwerk with their 'Computer World', may get an ache of nostalgia from 'I Hear Voices'; its bad ass old school electro beat harks back to a golden age of keyboard junkies. Oddly, you may even hear wafts of Bananarama's 'Cruel Summer'; it's probably not intentional (why would it be?) but it's still there.

Even with its energetic chorus, 'Re-wired' fails to really take off. It shows signs of promise, but never fully lives up to any of them.

The pace slows once more for 'Man of simple Pleasures'. There must have been a mistake at the studio however, as it's clearly sung by Richard Ashcroft from The Verve. Mistakes happen, but someone should've noticed this blooper, surely?!

There's more electro madness kicking off 'Switchblade Smiles'. Suddenly, out of nowhere comes a small army of drums, with menacing guitars to the rear. Finally, there's an element of danger in the air. It's the kind of edgy nuisance that is all too fleeting on this album.

Finally there's 'Neon Noon'; yet another slow number; it's a gentle wave, lulling you to sleepy town with soft electro chords painting an eight-bit landscape. If androids do dream of electric sheep, this song will surely act as the soundtrack.

Kasabian should be congratulated for not simply sticking to a formula and regurgitating the same old mush. That said, the directions this album heads off into may not sit well with die-hard fans. As a concept album, as such, it sort of works. It just doesn't quite fit in with what many would accept as the Kasabian sound.

It's a little too warm and cuddly in places, which may be enough to put most people off; particularly those who come in search of those infamous Kasabian beats.

With only glimpses of brilliance however, Velociraptor! disappoints in just not having the ferocity that its title implies.