Kirby and the Forgotten Land

If you’re a parent of young children, then there’s no doubt you’ve failed to escape the song “We don’t talk about Bruno” from the animated Disney film Encanto.

The song’s sentiment could easily lend itself to Kirby, a long serving character of many a Nintendo game. But despite having an extensive franchise that has been going since 1992, Kirby has struggled to make a name for himself and his impressive abilities, spending so much time in the shadow of Nintendo’s infamous plumber mascot. And although he has a solid fan base, it often feels as if Ninty subscribe to the view that “we don’t talk about Kirby”. 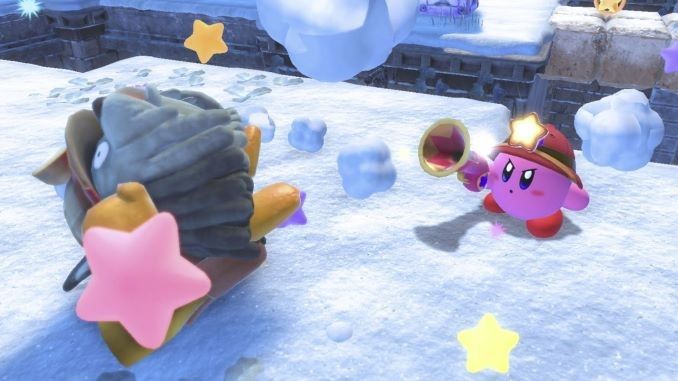 To answer your questions, yes it's loaded, and yes I'm prepared to use it!

It was a huge step then for HAL laboratory when it came to developing his latest adventure, by adopting a new direction, from his traditional 2D outings to the brave new world of 3D with Kirby and the Forgotten Land.

One day Kirby finds himself out and about in his familiar confines of the planet Popstar, when he gets caught in a mysterious vortex that finally deposits him in a foreign locale, that of Dream Land. He soon discovers that Waddle Dees have been kidnapped by the Beast Pack, and it is down to him to rescue them. So off he sets on a brand new adventure, into a curious world, full of wonder as well as new dangers.

Although Kirby is most definitely presented in three dimensions, the game is not exactly the open world environ that was often touted before its release. But that’s OK, as although the path is fairly linear in every world, there is plenty to explore; in fact you will have to if you are to achieve all the missions set out for you.

The game is based on a number of themed worlds, each with a unique feel and look. Kirby, who has the nifty ability to copy abilities by swallowing certain enemies, can then use these various abilities to his advantage to get through the levels. It’s not set in stone which is best to aid you on your quest, but you soon get a feel for what each one does, and you will know doubt have a few favourites that you rely on. There are a vast array to choose from, which just adds to the compelling nature of the game.

There are also various objects as well that our big mouth protagonist can swallow, which includes stairs, vending machines and light bulbs. They sound absurd but are implemented within the game beautifully, as are the various modes of transport that can pop up in levels too. 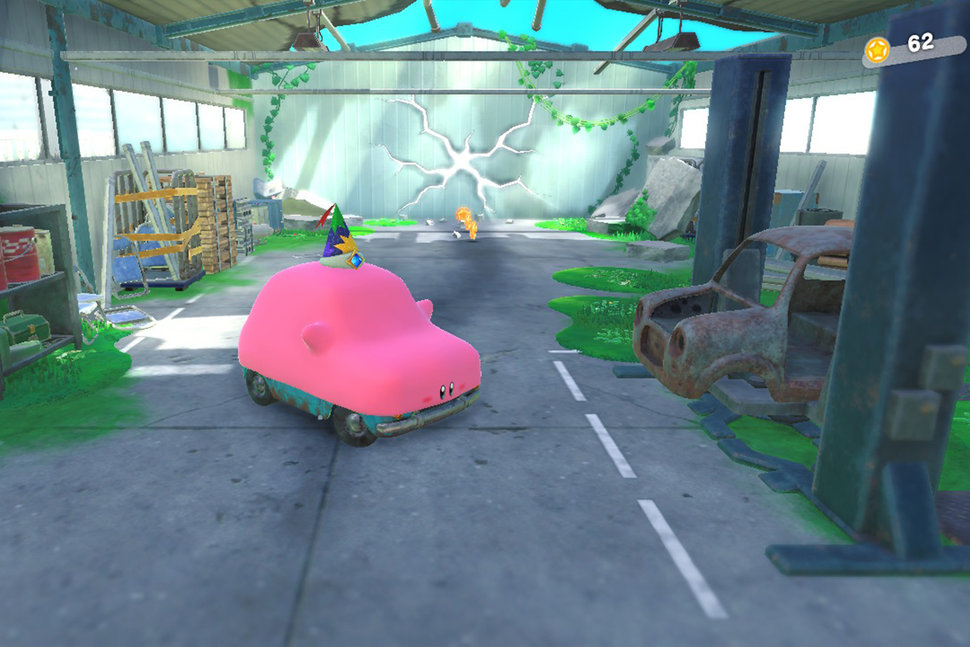 Wow, this pandemic has really helped clear the roads!

Obviously there are limitations of having such a game exclusive to one aging platform, with the Switch being a five year old piece of kit now, which is far from next gen. But you wouldn’t notice playing this title; although you don’t get the likes of ray tracing and any of the new next gen gubbins, the various worlds you get to explore are absolutely striking. It’s even more remarkable when you consider how impressive the game is considering its diminutive 6GB file size. How they’ve managed to condense such a good-looking game into a tiny file size is anyone’s guess.

There’s one criticism that has been regularly aimed at the game and that’s how easy it is. You can choose to play the game in one of two modes, Spring Breeze or Wild; the latter is the most difficult, and it’s fair to say the game isn’t exactly Elden Ring - thank the stars. Yes it’s a fairly comfortable game to play, but that’s not to say that it doesn’t have its challenging moments.

With each section you enter, there are a number of missions you have to complete if you want to set all the Waddle Dees free from that area. It is possible to zip through the levels and still complete them without fulfilling all the mission requirements, but the game somehow manipulates you subconsciously into feeling guilty for leaving any Waddle Dees behind.

There are also side quests to undertake, where you are rewarded with valuable rare stones – that are necessary when it comes to upgrading your weapons – with each one utilising a different weapon. This can be relatively quick, but also a little on the devious side, and may prove more challenging than expected, but in a good way.

This delightfully quirky world is rich for exploring, and the fact that in open play it’s difficult to die at any point, it gives you the freedom to take your time and explore every inch of the diverse and intriguing levels.

There are also a myriad of things to collect, which will certainly take you longer to achieve if you’re the completist type. On top of that, the Waddle Dees you collect help grow Waddle Dee town, returning it to its former glory, which includes a restaurant that also happens to be a fun mini-game.

Kirby’s first foray into the realms of 3D is an undoubted success; it won’t come as a surprise to anyone who has enjoyed Kirby’s previous titles, but this latest offering should definitely raise the profile of the hard-working star to a whole new level.

Kirby and the Forgotten Land is a joyous experience from start to finish. It is a game brimming with creativity and ingenuity that, like Kirby, sucks you in and keeps you riveted throughout. And yes, Kirby sucks, in the best, most fun way imaginable.