It’s difficult to imagine that in a decade or so, there will be a film made of the current Grand Prix motor-racing scene. Although its undeniably dangerous, interventions from various bodies has sanitised the sport, and although there’s a large number of drivers taking part, invariably only one or two win it, for the duration of the entire season.

It’s no wonder then that filmmakers have a tendency to look further back in history, to a time when racing was both dangerous and competitive, just as director James Mangold has with this look in the rear view mirror of one of the most punishing races of all time with Le Mans ‘66, AKA Ford V Ferrari. 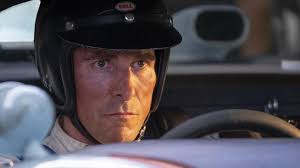 Bale was keen to show a serious side to his version of Mario Kart - the Movie.

During the sixties, one brand of car dominated the market in the US more than any other - Ford. But despite this overwhelming popularity, the company began to feel that its brand was starting to feel too safe, and a little on the dull side.

So when one of its execs, Lee Iacocca (Jon Bernthal), said he had a solution, Henry Ford II (Tracy Letts) listened. He was told that the best way to turn the current perception of the brand around, was to build a car to enter the most prestigious race of them all – Le Mans – and win it.

He agreed, and decided to hire Carroll Shelby (Matt Damon) to helm the team. Not only was Shelby a superb designer, he had also previously won Le Mans himself, so had the perfect credentials.

Shelby was well aware of the huge task at hand, considering Ferrari’s solid grip on the event, but he knew if they had any chance of doing it, it would be with Brit Ken Miles (Christian Bale) behind the wheel. Shelby knew he was somewhat hot-headed, but if anyone could do the impossible, it was Ken.

But although Shelby had every faith in Miles, his attitude concerned the execs at Ford, and so they were keen for him to very much take a back seat on the project. Without him though, their aspirations for crossing the finishing line first look likely to stall. 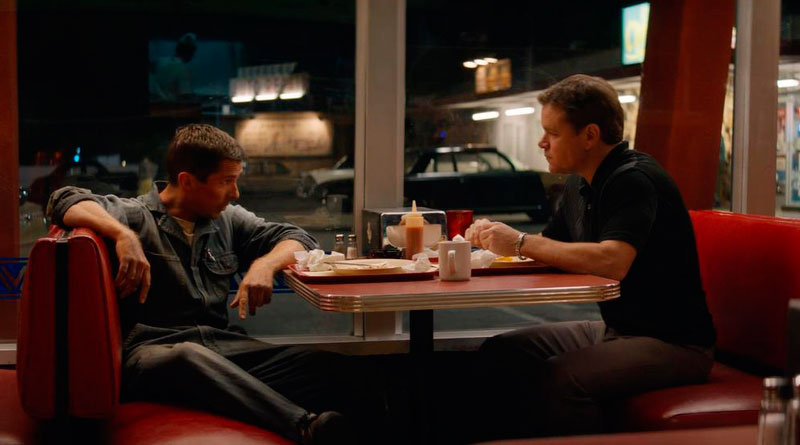 So you're telling me you don't like Ben Affleck either?!

Producing a decent racing film can be a tricky project. The likes of 1971’s Le Mans and 1990’s Days of Thunder have been driven by the passion their stars (Steve McQueen and Tom Cruise respectively) have for racing, and have suffered because of it. For instance, McQueen was so passionate to make the film, they even started filming before a script was even written.

Mangold at least has the good sense to balance time on the circuit, with that off of it. However, despite a solid cast and interesting characters, the story suffers from being rather flat. It’s clear that Bale’s storyline in regards to him being a family man is there to anchor his emotional side. However the most entertaining part of his relationship with his wife, played by Caitriona Balfe, are their northern English accents. Bale’s in particular sounds as if he’s channelling gardening guru Alan Titchmarsh. The result is run of the mill and rather dull.

He gets better results with his bromance between Bale and Damon. It’s a little obvious in places, but it serves as welcome interaction between two characters on an emotional level.

It’s invariably during the driving sequences that the film comes alive. Certainly during the races, there’s a raw, organic feel to the action, with what often feels like Mangold’s homage to Le Mans, that despite its barebones narrative, it certainly delivered from a technical point of shooting, the likes of which hadn’t been seen on screen before. Many of the scenes here are almost carbon copies, making the audience feel they’re actually in the car, but with that kind of intensity, there’s nothing wrong with that.

Mangold certainly gets a sense of period right. And as is so often the case with racing flicks, the cars are the real stars, and there are plenty of classics on show to make most petrol heads drool.

But perhaps this is where Mangold took a wrong turn; particularly as this is based on quite incredible real life events, there’s enough here that the story should have been king, and not the cars. The film’s two and half hour length definitely isn’t helped by the tedious family plot, which quickly slams the breaks on any chance of excitement building.

To that extent, Mangold’s film follows in the tire marks of many of the racing flicks before it: it does a fine job of revving its impressive engine, but the longer it goes on, the more obvious that it’s going to sit in the middle of the pack, rather than cross the finish line as an all-out winner.