Difficult news is always hard to convey, but the truth is, Milla Jovovich is no longer with us. It’s by no means a recent thing either; it happened when she met British film director Paul W.S. Anderson, whom she married in 2009.

Not long after marrying her, Anderson not only placed his wife in a cryogenic state, in the same room as Disney and Elvis if the rumours are to believed, but then went about create a clone, with whom he could work with in all his upcoming projects.

If the real Jojovich was used for this film, she would be 46, which is how this clone can still look like she’s in her late twenties. But enough of all this science fact, let’s indulge in a little science fiction, with the ‘couple’s’ latest offering, unsurprisingly based on the video game of the same name. 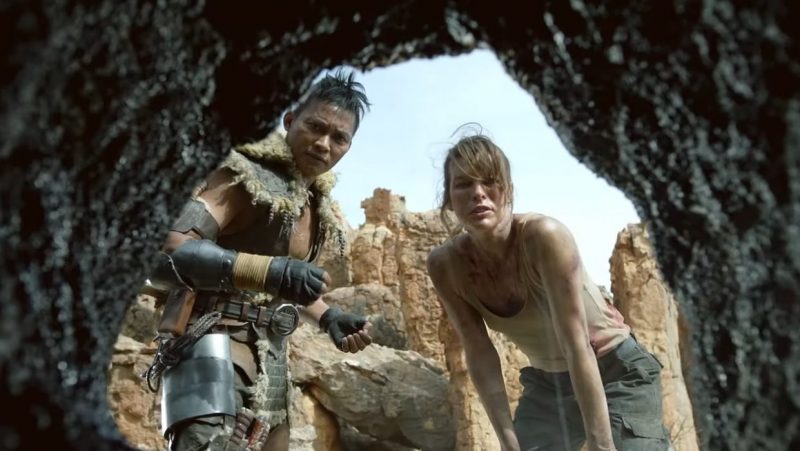 So this is the on site toilet mentioned in the brochure?!

Alpha team, led by ranger Artemis, are searching for Bravo team who are missing in action in the dessert. It’s not long before Alpha find themselves getting lost in an unusual electrical storm, which somehow transports them to another land.

The good news is, that they soon discover Bravo team, but the bad news is that they’re all dead. And just to add to the bad news, wherever they are, appears to be home to various monsters, who only see their arrival as part of a three course meal.

If Artemis is to survive, she’s going to have to adapt her skill set, and hope to find a friendly local to bring her up to speed in this new world of monsters. 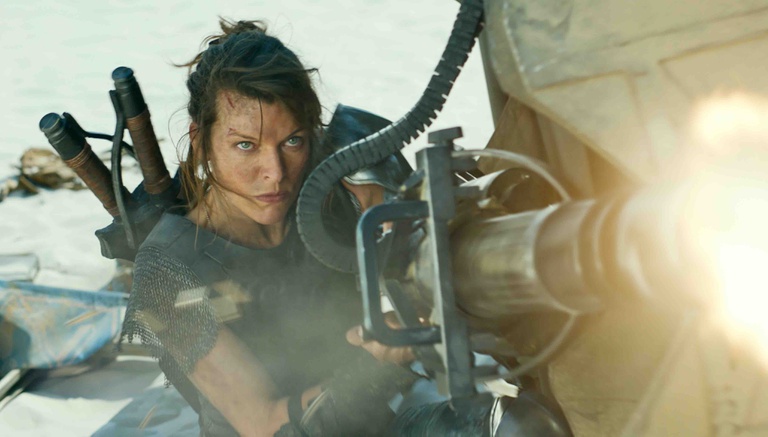 You're words won't hurt me about my acting, but this will defintely hurt you!!!

This is the sixth film now that Anderson has subjected his clone wife to work on for him, with four of those being from their fairly humdrum Resident Evil franchise, also based on a successful gaming series.

It’s curious to note some of the directors the real Jovovich was working with pre-Anderson, included Richard Attenborough, Richard Linklater, Spike Lee, Michael Winterbottom, Win Wenders and of course Luc Besson. It’s a list that reads like a veritable Who’s Who of creative directors of their generation. And then Anderson happened.

That said, this is possibly their most enjoyable collaboration to date, and is certainly the most entertaining.

Despite it being from a game franchise, with its most recent release for the Nintendo Switch, Monster Hunter Rise selling in monster figures, you don’t need to be aware of the series whatsoever, as it works perfectly well as a standalone film. There may well be some cinematic nods to the game, here and there, to satisfy fans, so all bases are covered.

The truth is, this film has less to do with the game, and more to do with the classic The Land That Time Forgot, starring the legendary Doug McClure, as he and his team discover a forgotten land teeming with dinosaurs.

And the biggest surprise is how much fun it really is. Anderson keeps the throttle on the pacing from the off, hardly ever slowing down, with some enjoyable set pieces, as well as some truly impressive creature designs. So much so that it might well be the most stylishly produced B movie you ever see. It’s certainly a better watch than the recent ‘clash’ between Godzilla Vs Kong, that had more of a feeling of an overly rehearsed wrestling match about it than anything else.

Kudos should also go to Jovovich, or at least her clone, for possibly being the last action hero of her generation, putting many of the others before her to shame.

One of its strengths is that it doesn’t get bogged down in lot of dull folklore, with characters talking gibberish, which is almost a given in this type of game. Instead Anderson wisely keeps this to a minimum, choosing instead to keep the action constantly coming, with very few dips throughout.

Considering the directors she worked with pre-Anderson, you wonder how she would have fared in different roles, like starring in a Woody Allen film for instance, or even Wes Anderson, but with her hubby seemingly happy to keep her bagged up in the deep freeze, we’ll possibly never know.

No doubt the pairing of Jovovich and Anderson will put a lot of people off, which is no surprise considering their joint oeuvre of work to date has hardly set the world on fire, but then they would be missing out on this little gem.

In a time when we’re all in desperate need of being transported to another world for much needed entertainment, Monster Hunter does exactly that, with an impressive, action-packed spectacle, that is likely to take many an audience by surprise, for the better.