Considering how talented the trio that make up N.E.R.D are (Chad Hugo, Shay Haley and Pharrell Williams) its surprising that theyre not a huge deal on the current music scene. Especially when you consider than no-one blends rock, hip hop and funk like they do. 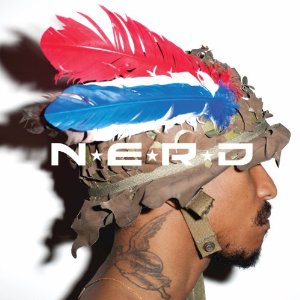 Nothing is only their fourth studio album, but it oozes quality from every audible pore. Theyve poured so many musical styles into it that its one helluva musical milkshake.

Its amazing how many bands fall at the first hurdle; the opening track should be one of your strongest, laying down exactly what the band are about and have to offer. Party People does just that. Its an infectious piece of dance pop that does more than just nod to the late King of Pop and his disco legacy. It also has a great horn section which thankfully crops up on a few other tracks too.

Within seconds of Hypnotize U starting, its difficult to take it that seriously. Its made worse by the machine gun lyrics touchitgirltouchitgirltouchitgirluh; the whole thing sounds like a parody delivered with the mocking sincerity of a Flight of the Conchords track. If N.E.R.D are parodying New Zealands fourth biggest folk band then its a stroke of genius  we doubt thats the case somehow. But despite its silliness, and the fact that sounds remarkably like When Doves Cry by Prince, it still manages to be a little on the awesome side.

Another aspect to the album is the influence of music from the seventies. Help Me sounds as if its been travelling to that particular decade back and forth in a DeLorean, and bringing back some of its musical goodness. And it works to great effect.

Then theres Victory. Were not entirely sure who the big Queen fan is within the band, but this is vintage Freddie Mercury material, albeit laced with a hint of Stevie Wonder.

And then the funk returns with Perfect Defect and those delicious horns. Its a track that not only has a lot going on, but its also got it going on, and you can ask more from a song than that.

Just for a change, they tap into a soulful side for Ive Seen the Light; again it has a seventies disco vibe going on, but with added depth.

Nothing on You is a trademark effort that is so N.E.R.D; it has that energy, breathy lyrics and some rapping thrown into the mix. Oh and a beat to die for.

Proving how supremely confident they are, they put their first single release Hot N Fun, featuring Nelly Furtado, right at the end of the album. And why not end on a high?

Although the album is awash with different influences and styles, the trio know high to pull them all together in the mix, wrapped up in a top-notch production.

This is a supremely polished affair, that may well not catapult them to a greater realm of greatness, but really ought to. And if youve never heard a N.E.R.D album, then you really cant go wrong with Nothing.