After the release of his very first full length animated feature in 1937 with Snow White and the Seven Dwarfs, Walt Disney chose to follow up with another timeless story, this time based on Carlo Collodi’s 1883 children’s novel The Adventures of Pinocchio.

The result was 1940’s Pinocchio, which has gone on to be a classic, that's also seen a myriad of versions both on film and TV since. In fact this in one of two set to be released this year, with an animated version by Guillermo del Toro on the way.

This version though, a live action affair, is directed by Robert Zemeckis, who knows a thing or two about live action flicks, helming as he did the classic Who Framed Roger Rabbit in 1988.

Having been on his little feet for some time, Jiminy Cricket (Joseph Gordon-Levitt) seeks refuge in a shop of toys, clocks and oddments, owned by carpenter Geppetto (Tom Hanks).

It’s here that he finds Geppetto working on a wooden puppet boy, a sign of his grief for the loss of his own son. Having finished the job, he gives the wooden toy a name – Pinocchio. Just as he’s off to bed, he notices a star from his window, which he wishes upon.

As he sleeps, his wish brings a blue fairy (Cynthia Erivo) to his shop, who makes it come true, to make a Pinocchio (Benjamin Evan Ainsworth) come alive.

To help him out, she put Jiminy in charge of his conscience, and if he helps him navigate the challenges of right from wrong, Pinocchio will become a real boy.

So when Geppetto sends him off on his first day at school, Pinocchio cannot wait to just be like all the other children. But when his journey there gets interrupted, the young wooden boy finds himself on an adventure of a lifetime. 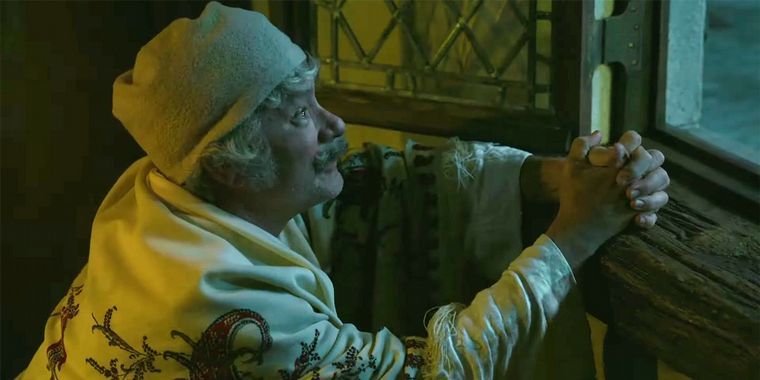 I just wish that no one sees this film, I mean, they probably won't anyway.

You think a story like this would be in safe hands with someone of Zemeckis’ calibre. Boy, how wrong you are. This version is both equally irritating and annoying, with virtually nothing going for it. Considering how groundbreaking Who Framed Roger Rabbit was in 1988, visually this film disappoints. Often there’s a feeling that the film is in two minds as to what type of film it is, either a live action or full animation. Because of that, it’s fairly jarring.

And then you have the film’s attempt to be relevant, that doesn’t work at all. For example, there’s a misplaced Chris Pine gag, as well as a lot of nonsense about peer pressure. On top of that there’s the use of the work ‘bollocks’ that doesn’t feel terribly Disney, that’s bound to have old Walt turning in his cryogenic tank.

It also features music, with a few of the classic songs that don’t appear in full sadly, and some wholly appalling original tracks that shouldn’t have featured at all.

And even though young Brit Lewin Lloyd’s turn as Lampwick is one of the rare entertaining elements, his accent is full on Bugsy Malone in that he’s clearly English giving an almost parody of a New York accent. It’s just a niggle, but one of so many.

Another being a character who is a puppeteer, controlling a puppet by strings, as the name suggests. The puppet in this case is CGI and the puppeteer an actress, who, for some unknown reason, chooses to act as a ventriloquist and have her dialogue for her puppet – on strings and not on the end of her hand – come out of the corner of her mouth. She’s a puppeteer, with her puppet below her, so why on earth would she be doing that? Like much of the rest of the film, it makes little sense.

When you consider how joyful, creative and original Matteo Garrone’s 2019 live action Pinocchio was, this is an embarrassment by comparison.

It would be understandable if this were an independent film, but it’s simply mind-blowing that Walt Disney saw fit for this feature to carry their prestigious name and logo.

Sure, Geppetto might be pretty handy crafting wood, but really, there was no need at all for this load of old cobblers.