There have been six films to date featuring the Predator, and that’s including the two spin-offs where it hangs with its cinematic chum Al, aka Alien. It’s a surprising amount for a character from space, that not only doesn’t have a cool catchphrase, but doesn’t speak at all, only making electronic purr-like sounds; although make no mistake, you wouldn’t want it sitting on your lap.

With so many entries now, offering a similar kind of narrative – boy, he’s a tricky critter to kill - it’s no wonder they kind of all blur into one.

And although this fifth entry in the main franchise still adheres to that narrative, it at least puts a refreshingly new spin on things. 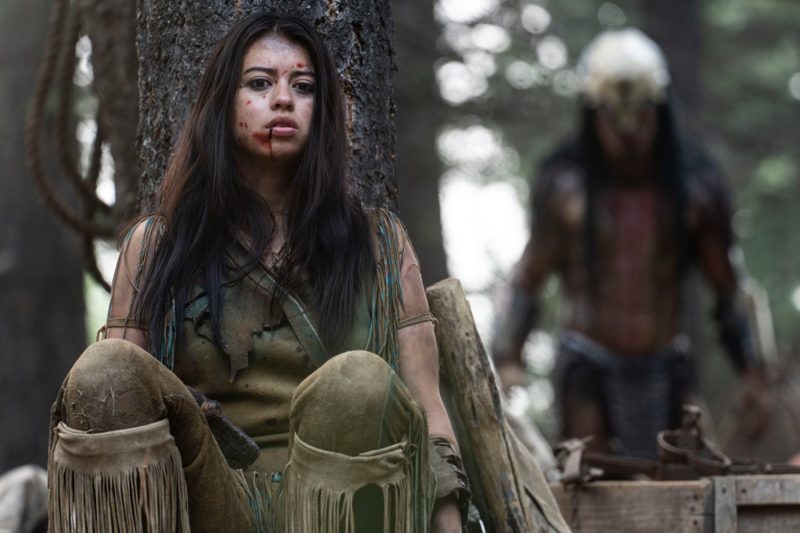 I thought this game of hide and seek was going to be more fun than it is.

1719 and living on the Northern Great Plains of North America as part of the Comanche tribe is hard enough without also being a woman. That’s the case for Naru (Amber Midthunder) at any rate, who is keen to prove that she is more than equal to the task of hunting and protecting the tribe like her male counterparts.

To illustrate the point, she is off hunting alone, with her dog for company, tracking deer, when her target is spooked by something flying in the sky. To her it resembles the Thunderbird, considered a legendary creature amongst her people, and therefore takes it as a sign that as far as hunting is concerned, she’s on the right track, as it were.

So when her brother Taabe (Dakota Beavers) heads off with a hunting party in tow to tackle a mountain lion, Naru joins them. It’s a hunting trip like no other though, when Naru soon discovers that there’s something out there more than mountain lions and bears, far more dangerous, blurring the lines between who the hunted are and who is the hunter. 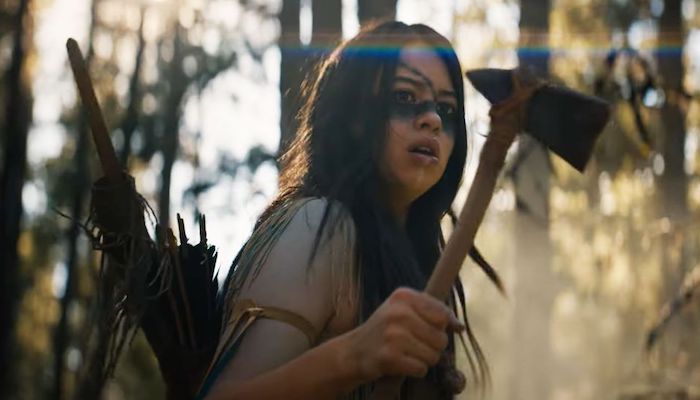 Wait a minute, this isn't my hairbrush?!

This then serves as a prequel to the entire franchise, and although it would have been an interesting take to set it around the forties or fifties – which certainly would have given it that similar b-movie vibe that 2018’s The Predator was going for – but going back to 1719 works too, remarkably so.

US director Dan Trachtenberg, who has taken his sweet time to get behind the camera again since his directorial debut with 2016’s much-acclaimed 10 Cloverfield Lane, makes an impressive return with the latest entry in this tired franchise.

As previously mentioned, the story is hardly new; Predator arrives, people think they can kill it, they die. It’s a familiar formula, and yet the new old setting completely energises the series somehow.

Much of this is down to use of a female protagonist, who comes across at times as a North American Indian version of Lara Croft; she uses the weapons at hand in a totally original fashion, that are likely to predate that kind of usage by some time margin. But let’s not be picky. But part of her charm is that she’s not exactly of Amazonian stature, and she knows it, which is how she survives on being that bit smarter than her male counterparts.

Midthunder, who is of Sioux decent, makes for the perfect heroine, who not only holds her own against any man, but is also smart enough to understand that this new foe is unlike any other they’ve faced. At times her movement and actions are so animated, she resembles a video game character.

It’s also refreshing to see that Trachtenberg at no point sexualises his lead, thankfully steering well clear of the kind of skimpy outfit Raquel Welch clad in the 1966 classic One Million Years B.C, for something far more practical; and the only make-up she wears is war paint.

There’s no sign of ring rust from Trachtenberg, who delivers a gripping and energetic entry in the franchise, that also works perfectly as a standalone flick. It’s highly action-orientated, which is all you can ask for from a Predator film.

One small niggle would be that the tribe represented here speak with very strong North American accents; of course it’s only a Predator film, but it would have earthed its tribal material if they spoke their own language and it was subtitled. It’s made even more curious by the fact that some French oiks turn up in the film, and they get to speak in their native tongue. But we get, a subtitled Predator is a really tough sell.

This prequel take on the entire franchise is wonderfully refreshing, completely rejuvenating the lacklustre series. Fingers crossed that it is a standalone, one-off entry, because a sequel to the prequel would start to feel like its hunting on very similar grounds once more.