You have to feel sorry for Rayman; back in the day, he was the one going off and doing all the adventuring with his floaty bits and pieces. In 2006 he starred in Rayman Raving Rabbids, opposite a bunch of reckless upstarts.

Since then however, the Rabbids have become a popular franchise in their own right, leaving poor old Rayman on the sidelines next to the likes of Donkey Kong, who went through the same kind of deal with a certain Italian plumber. He may well possibly be planning a revolt of sorts  he is French after all  that may or may not lead to the Rabbids demise, but until that day, those pesky Rabbids go from strength to strength.

Their last three outings to date have all been a collection of mini games. All have made the most of the Wiis unique controls; the last even included games that could also be used with the Wii Balance Board. Instead of yet again going down the mini games route, Ubisoft have let the Rabbids loose with their own platformer. And they so made the right choice. 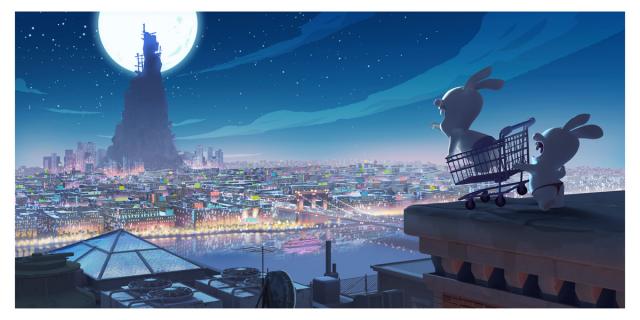 These trolley wheels always lock when you're miles from the car.

The Rabbids have gotten a little on the bored side of causing all manner of chaos on Earth, so they have decided to go to the moon for a bit of a change. However, theyve noticed that its quite a way off, but theyve come up with a cunning plan. Theyve decided that if they collect as much stuff as they can, they can build a tower all the way to the moon.

You control a shopping trolley that is being pushed by one Rabbid, while another sits inside, piling all manner of things into it. You then have to make your way around 40 levels, set within 15 different environments ranging from an office floor, an airport (with slightly fewer moral dilemmas than Modern Warfare 2, thankfully), hospitals, rooftops etc.

Within each level you have to collect as much stuff as you can thats littered around, as well as items hidden in cupboards etc. If you bump into people with your trolley, even their clothes come off - which is something weve yet to experience in our local Tescos, sadly  which you can also collect. At the end of the level, you dump everything youve collected down the loo, where it eventually ends up on your ever-growing tower.

Of course there are many obstacles in your way; from barking dogs to floor-cleaning devices, and even men in inflatable green outfits, all out to slow your progress down. Its just as well that your trolley is tightly controlled then, as it manages to turn on a sixpence (which was, for our younger readers, a coin in olden days worth about 3 pence today. Bless) and able to get you out of all sorts of trouble. 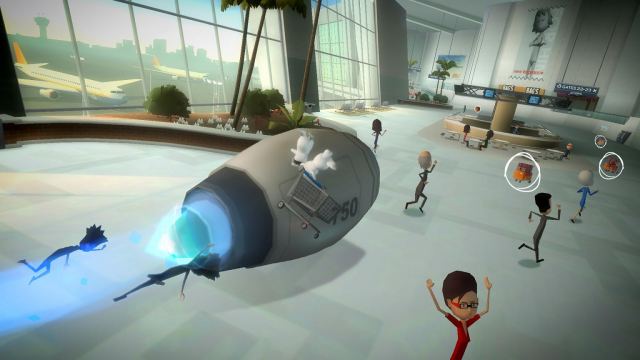 Guns in an airport lounge are so last year...

There are sections where your trolley gets upgraded too; for certain levels you pick up a hospital bed, with a patient covered in an oxygen tent of sorts, that allows you to float up, up and away  for a bit at least; theres also a jet engine that can be attached that gives that extra oomph just when you most need it; they even find themselves in a large rubber ring, bouncing their way out of trouble.

Theres something familiarly retro about the game. Its style feels like a homage to some classic games of old; its layout is similar to the classic 16-bit game Zombies Ate My Neighbours, with its almost top-down kind of view, as well as its crazy characters and its use of trampolines (beds in this games case) to get into otherwise inaccessible areas. There are even Santas running around the place, who are reminiscent of those found in the earlier Toejam & Earl titles. If youre going to borrow from a game, you might as well borrow from some of the best.

Another thing that adds to the games overall quirky feel is its use of music. Within the game, Rabbids find themselves listening to Boney Ms River of Babylon in every lift they enter, John Denver's Country Roads and other obscure titles. But somehow, they all fit in with the madness.

The Rabbids themselves have their own band, playing the kind of music you might find in an Emir Kusterica film (Underground, Time of the Gypsies) with its bold brass sections and frantic energy that are popular in South Eastern parts of Europe. No wonder the Rabbids are fans.

Despite the feeling that some of the levels are a little on the dour side, particularly the office /warehouse rooms that appear to be coated in a deathly grey, the addictive game play more than makes up for it.

Not only do you have to collect lots of different items, you have the ability to shoot at things too. You can either shoot out the Rabbid who lives in your Wiimote  did we mention that there is one living there? No? Oh  or you can knock over a water cooler and use its tank to propel at foes. You can also throw bombs back at the devices that are chucking them your way.

And although its all quite cutesy, the later levels can be real pigs. Pushing the trolley around the upper floors of a construction site was just plain evil at times. Still, theres certainly no complaint at having challenging levels, just as long as theyre not all like that.

Away from the main game, there are a few nice touches, like the ability to customise your Rabbid. This isnt just the ability to change outfits, but to create your own tattoos for them as well. Our Rabbid ended up parading around in a red g-string, with a blue face and an octopus draped over his head. Although initially a disturbing sight, it felt wrong to change it to anything else.

Love them or loathe them, this Rabbid outing away from the minigame marathons was an inspirational move. It could have gone horribly wrong, but the truth is, it didnt. Their brand of potty humour still manages to keep smiles on faces, while the old skool approach to the game play makes it a thoroughly entertaining title for young and old.

With the Rabbids in this kind of rampant mood, poor old Rayman may well have to look into taking early retirement. Sacre bleu.