It's funny how some titles just capture the imagination of gamers and get classified as 'AAA' titles. Titles like Halo and Gears of War were embraced with sweaty palms when they were first released, having the power to be games that people would buy consoles for just to play them.

Resistance: Fall of Man was a launch title for the PS3 in 2007. Although it garnered mostly positive reviews, it was never really considered as a must-have title. Its release was probably hampered by the fact that it was a PS3 exclusive, and as the PS3 was retailing at over 400 smackers at release, the system and its launch games were very much a considered purchase.

Although things have changed as far as getting more out the current next gen consoles, sadly attitudes to this series have not. This is a travesty when you consider how damn good this actually is.

It's four years on since Operation Black Eden, and the only place in the world that has managed to survive the Chimera onslaught is the good ole US of A. Joseph Capelli is hiding out with his wife and kid in Haven, Oklahoma; but the name isn't as safe as it suggests when Joseph notices a Chimeran Terraformer (a weapon that can destroy like a good 'un, anything in the path of its evil energy rays) heading their way.

Joseph's path soon crosses that of Dr Malikov, who believes that he has a way to destroy the Chimera once and for all. All he has to do is get to the city that doesn't sleep, NYC. So leaving his family behind, Joseph decides to accompany the doc on quite possibly the most important road trip for mankind. 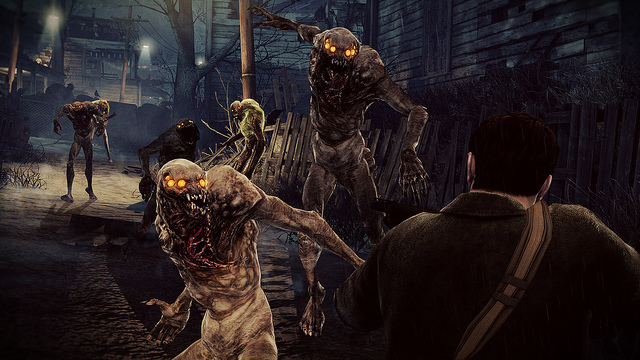 Listen, I've told you before, it's a really bad skin condition and you really should know better than to tease me about it.

It's quite a brave move for a trilogy to change its main protagonist for the last part of its story arc, but it works perfectly. Joseph appeared in the last game, so it makes sense that he picks up the Resistance baton and run with it.

Everything that was wrong with Gears of War 3, Resistance 3 gets right.

The first positive is the setting. Yes it may well be back on US soil, but the developers have really gone to town in their attempt to make it feel like the 1950's. It just has a cohesion that flows all the way through.

And then there's the level design. It by no means re-invents the wheel, but just simply lets it spin effortlessly forward. If you feel at any given time that you're pinned down in a particular area, you can just pick yourself up and try another approach. If you feel like going head first into a group of enemies, knock yourself out; but if you'd rather sit back, find a cosy nook on a top floor of a building and take a number of them out from there with a sniper rifle, you can do that too.

What adds to this sense of freedom is the number of weapons you can access, at any given time. The weapons wheel that featured in the first game makes a welcome return, allowing you to quickly access any number of various guns for the job on the fly. Of course if you run out of ammo for any particular shooter, then you just have to move on to another one until you pick up more ammo. This means that you don't have to rely on just the one weapon to get you through the campaign, and get a real feel for a selection on offer. Not only that, but each one comes with its unique secondary weapon, which can really pack a punch when necessary.

This variety of weaponry on hand will useful too as there's a nice range enemies to take on; and you'll soon discover that certain weapons work better against certain foes, just to keep you on your tootsies.

What's also pleasing is that it's not all running around on foot. In one section, you get to take out enemies on a moving train, which is eerily similar to a scene that featured in Uncharted 2; it's not a like for like copy per se, but it's fair to say that it's a fond homage. Another section sees you doing similar things on a boat. Again, not game defining, but elements of game-play that just fit snugly into the story.

The only whiff of let down is in the final section of the game, inside the Terraformer in New York City. It's only at this point the game flags a little, and plays out like any other clichéd FPS shooter in alien confines.

But it's only a minor disappointment in the single player campaign. The overriding sensation playing through it is how much fun it is. It really is the variety on offer throughout that just makes it a joy to play. One minute you're fighting with a bunch of comrades, the next you're very much on your own. In one section you're deep underground, and in another, your find yourself in a prison break scenario. And it goes on.

The online multiplayer element of the game is adequate, just doing enough to keep fans of old favourites of Deathmatch, Capture the Flag and the like entertained.

What's more impressive is that the Single player campaign can be played co-op with another player, either next to you or online.

And if that wasn't enough, the game is also Move enabled. Not just a section of it mind, but the whole thing. In one sense, due to the nature of the controls, it's almost like playing another game; it's one that takes some getting used to, particularly if you're also using the navigation controller, as you don't have the same speed of movement in moving around. But if you think of that as less a negative, and more of having two games in one, then you can't go wrong.

And if Insomniac hadn't done enough with all that, you can also play it in 3D if you have the speccy tech to do so.

With little word coming out of Insomniac, it seems doubtful that the series will actually continue any time soon. If that's the case, it may well be the Fawlty Towers of the game world; it may well be short and sweet, but there's nothing wrong with going out on a high if it's as enjoyable as this.

If you have a PS3 and enjoy your First Person Shooters, then resistance to this title is futile.