It’s no real surprise that car racing games are popular; the notion of taking a curve just right, putting your foot down, overtaking the competition and waving them goodbye in the rear view as you speed off into the distance. And that’s just at the lights coming out of IKEA onto the North Circular Road.

What is a surprise is how few and far between bike racing games are, especially when you consider that the first foray of freedom for youngsters often comes on two wheels with the gift of their first bicycle.

Even the success of the 1991 classic Road Rash, which combined racing and combat, didn’t kick-start a rush of two-wheeled frenzy in video game form.

Instead, motorbike games have for the most part been rooted in reality, more specifically sports, with franchises such as the MotoGP, TT Isle of Man and Ride of which number four is the latest instalment. 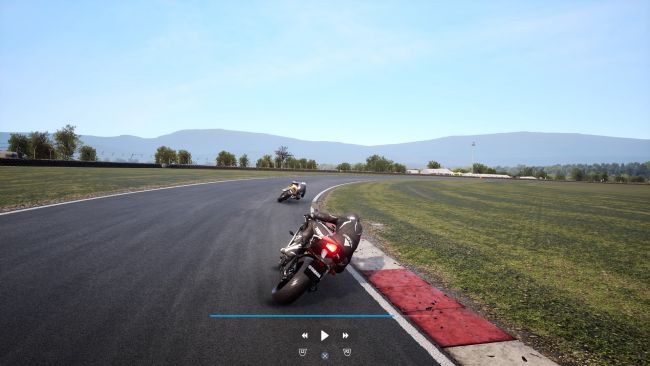 It is a game where you take part in a series of races. And that’s it. It’s this kind of descriptive imagery that the game’s publisher Milestone srl can get behind, as it would certainly be in keeping with their game’s philosophy.

If you enjoy the occasional racing game, with thrills and spills, then this Ride is not for you.

Often games will initially hold your hand at the start of a game, with a warm-up tutorial. Not so Ride 4, where you are literally on your bike. You are confronted with various menus and options, which all lead you straight onto the track.

There’s a glimmer of hope when a physical racing line appears when approaching bends, as they’re the equivalent of training wheels for racing titles. Unfortunately it’s not much help unless you have full control over your bike.

Now due to the use of controllers, most racing games can be simplified to just two trigger actions, with one for stop and the other for go, and this game is no different. However, the bike doesn’t respond how a car racing game would respond to these commands, making it difficult to find a responsive rhythm. 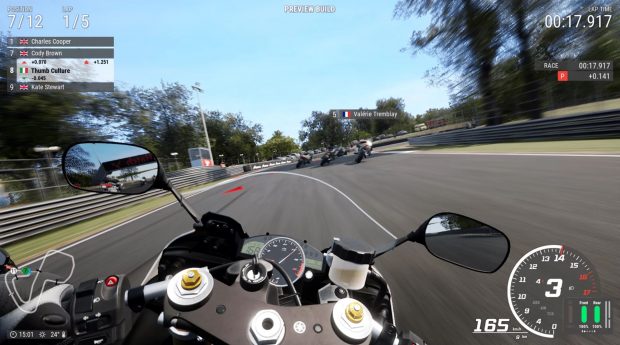 I'm still not sure why I couldn't have a media player on my dash to listen to podcasts.

In fact it’s incredible how we found that even taking a corner at a snail’s pace, the turning circle of the steering felt woefully unnatural. Having been on a motorbike before, one of the advantages of riding one is how very responsive they are at turning, and how incredibly tight their turning circle is. Not so for Ride 4 apparently. You can often find yourself in a lower gear, taking a tight corner, and wrestle as you might with your controller to take it appropriately, find that no amount of wiggling will prevent you going straight into the hoardings. Perhaps it is an accurate representation of official racing bikes, as we found the same problem with the recent F1 game, so it's probably not them, but us. Still, give a gamer a break why don’t you.

Still feeling the calling of the tarmac, we ventured into Career mode – or at least we tried to. First there’s the time attack to contend with; you, on your tod, driving around an empty track. Get a recognised time, and you pass, if you don’t try again. And again.

So despite that being an all too dull exercise, at least it’s onto the racing now, right? Not a chance. Next is the track test, that, surprisingly, sees you racing around an empty track on your own, but this time you’re driving through gates, being timed, changing the dynamic completely from the last trial. Or not. If you get past this trial, you finally reach the racing stage. Possibly. We’re not entirely sure as we didn’t make it that far. We find that when your knuckles are becoming increasing white from gripping so hard, and you feel anger visibly surface across your face, it’s best to walk away.

We did take part in a standard race, just to say we did it at least, but have to confess to not even making it all the way around due to further temper tantrums brewing.

With an ongoing franchise, it’s believed that developers are keen to surpass what they achieved with the last game in any way they can. It’s quite horrifying then to think that as this is the fourth instalment: how hideous must have the previous entries been to play?

What we can surmise, quite definitively, is that Ride 4 is not a pick up and play title. It is a game clearly aimed at those not only with a passion for racing motorbikes, but are attracted to the authenticity of it. And for that alone, the game should be commended.

What is inexcusable however, are a number of omissions, namely no tutorial, no atmosphere, and no personality.

In recent years, many driving games have included personalities into their worlds, either real life or fictional, to give the game some added colour. With its utilitarian approach to racing, Ride 4 is all shades of beige. The menus are drab, the courses are no doubt authentic and yet are extremely dull, with the whole racing experience lacking charm or charisma.

It doesn’t have to be this way. One of our favourite titles this year has been Lonely Mountains: Downhill, a simple, indie title that just has you riding down a mountain on a push bike on your own – so essentially it’s just you going for a ride on your bike. And yet it’s a truly fun and thrilling experience, as you attempt to reach the bottom in a fast time and in one piece.

Much like the recent F1 2020, there will be a market for this type of straight-down-the-line, no fuss, no thrills title, but that’s no excuse for providing a title that is completely devoid of a vital element in video games – fun.