Like so many other media industries such as film & TV, the trend for building on a franchise is ever present.

There’s nothing wrong with that, of course, as long as there’s something there worth continuing, and in the case of the Orphan franchise, there clearly isn’t, and it’s simply an outrageous means of making more money from a terrible idea.

And the gaming industry is no different; if a game sells, then rub your hands together for the inevitable sequel.

So it’s hard for originality to break through. And if it does in a big way, the irony of course is that it’s likely to become part of the franchise cycle. 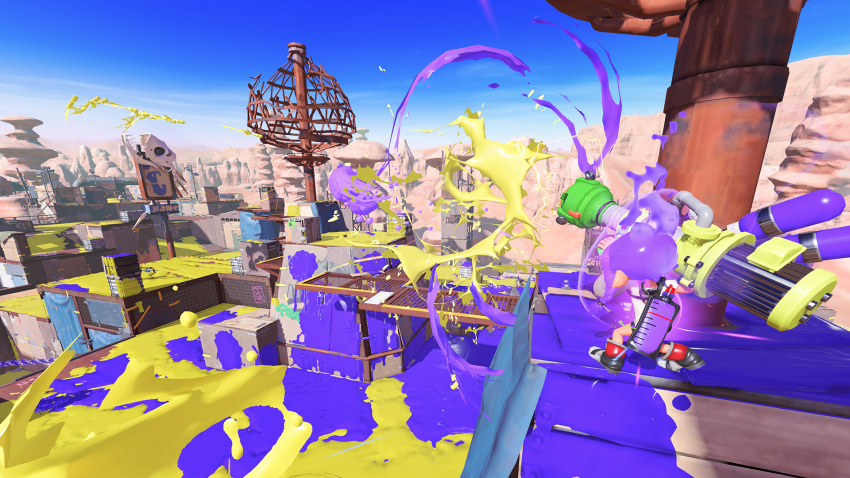 Don't have a go at me, I'm just doing what the council tell me to

One of the strongest original games from Nintendo in recent years, came by way of release of Splatoon in 2015 for the Wii U. Seven years later then, and the third instalment splats onto our screens.

For anyone who has played either of the two previous titles, the mechanics are completely the same: multiplayer 4 x 4, with whoever covers the playing area with more paint, wins.

The first thing you encounter in the game is the tutorial, with an unusual twist, that being having to complete it with motion controls. These thankfully can be turned off in the game (in settings), but you have to get past the tutorial first, that sadly doesn’t give you the option to not use motion controls. It may well be a prompt by Nintendo for more players to use this option, but really, you’re going to have your rear handed to you on a splattered plate more often than not if you do.

You’ll then return to the familiar streets of Splatsville, where you can visit shops and choose which type of game you want to play. It still remains a missed opportunity, as it offers nothing that using the menus can do. It could so easily have been a more embracing hub for players, akin to what Sony created with PlayStation Home, but it still remains a sterile hub that offers very little.

So, to the multiplayer. Again, Turf War is pretty much the same, with the addition of some new weapons, maps and such. It’s a mode that we’ve always struggled with; in some cases it’s a hardcore third-person shooter, that shows little mercy. Sure the characters are cartoony and cute, but players of this game take it darn seriously. 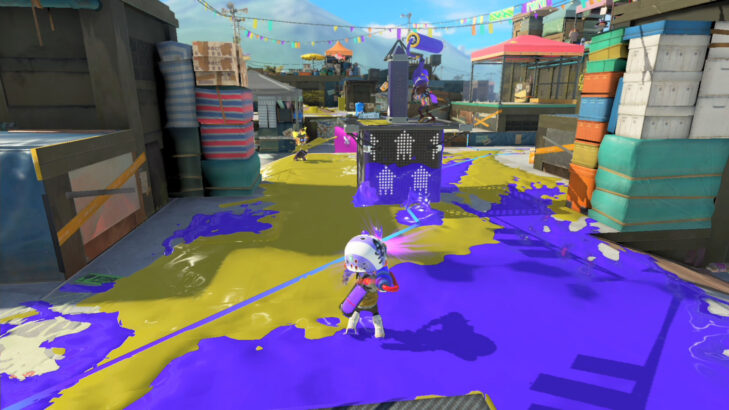 We find that there are two type of players: painters and shooters. The painters are simple folk, who mostly enjoy just getting the paint down on as much of the map as possible, whilst doing their best to stay out of conflict. And then you have the shooters, who, you know, like shooting.

Because there are only ever really just these two camps, the game feels fairly linear throughout. By this third entry it really feels as if the game needed to evolve that little bit more in some way.

It doesn’t help that the matchmaking doesn’t feel terribly balanced. Every game we took part in was very rarely close, with one team more often than not, dominating the other. We never took part in a game that was evenly matched around 50/50, so you always knew if you were on a winning team or a losing one, pretty early on. So in that sense, not a great game for newbs.

And even though the developers have already taken a look under the bonnet regarding the connection dropouts, we still found far too many games being pulled due to technical issues.

But here’s the thing, it doesn’t matter. You see, it’s not all doom and gloom on the Splatoon front, as this third instalment comes with a single player campaign. And what a campaign it is.

Once you’ve gone down a drainhole like a turtle in Splatsville, you get taking to another area where the single player campaign plays out. There are six areas to explore, with each featuring a number of kettles for you to dive down into. Each kettle is its own unique level, offering its own unique play through. For example, one can be as basic as getting through the level and shooting all the enemies. Another however, may see you simply jumping to avoid lasers. And another where you have to create a copy of a work of art put together out of crates, by sculpting it with your gun. The level if ingenuity and creativity throughout is truly impressive.

Not only is every challenge different, it also forces you to use different weapons and skills that will no doubt improve your abilities when it comes the multiplayer, which is just sharp thinking. So essentially, it’s a single player campaign tutorial that is a must to play. Not only did we prefer it to the multiplayer, it actually encouraged us to play it, thinking we had improved. Turns out we hadn’t, but it was a nice feeling while it lasted.

We’d even go as far as saying that the single player campaign is worth the price of admission for the whole game alone.

But there were other surprising areas we enjoyed too. The Salmon Run for instance, which only appeared occasionally throughout the second game, can now be accessed whenever you want. Again, we preferred this mode, which sees you having to hold down a position on a relatively smaller island map with three other players, after wave after wave of attacks. We found that we got a greater sense of team play spirit from this mode than Turf Wars itself.

And if that wasn’t enough, there’s Tableturf battles; a two player game that uses a card system that lets you place shapes down on a board, with a Tetris vibe, with the aim to try an cover up as much of the playing area as possible with your shapes. It looks weird at first, but when you get the hang of it, it's deliciously simple, and a wonderful addition to the overall game.

It does lead to one other niggle however, accessing areas. It is notoriously bad throughout, with nothing vaguely intuitive about it whatsoever. Take the addition of lockers for instance. We’d heard about them, and had won a few objects we could place in them, but we could not for the life of us find where they were. They were of course, hidden in plain sight, but we had to look it up on YouTube to discover where the hell it was.

The same could be said for Salmon Run and Tableturf battles and single player campaign, with all struggling with accessibility issues too. Although they may be pleased with the overall conception of Splatsville, it just doesn’t work on a practical level.

Overall though Splatoon 3 has been a revelation with this third outing, with some awesome additions, that even if you haven’t been a fan of the series before, make this one well worth picking up and truly getting your splat on.