A strange thing happened with Tom Clancy's Splinter Cell Conviction, the last shadowy outing for Sam Fisher: we found ourselves almost enjoying playing it. So there was almost an element of pleasant anticipation for this latest adventure.

But only five minutes in and our hopes were dashed. This was going to be a real slog.

And so it was. Despite many of the good things that came out of the previous game, like the mark and execute technique, they've been fiddled about with to make them less fun in this offering. There was a real cinematic quality in pulling off up to four kills simultaneously, but difficult to achieve here for some reason. One or two was fine, but any more than that proved elusive.

Then there was just the whole sneaking around thing. No-one in gaming can have stronger knees than Sam Fisher; he'll definitely struggle to get out of a chair when he's older though. Part of Fisher's shtick is creeping softly softly up on an enemy and taking them down all stealth-like. Regardless of how slowly you go though, more often than not you would alarm them in some way and they might put up a bit of a struggle. The only way of being any quieter is if Fisher had the ability to hover about an inch of the ground. So what used to be bread and butter kills were more of a trifling experience. 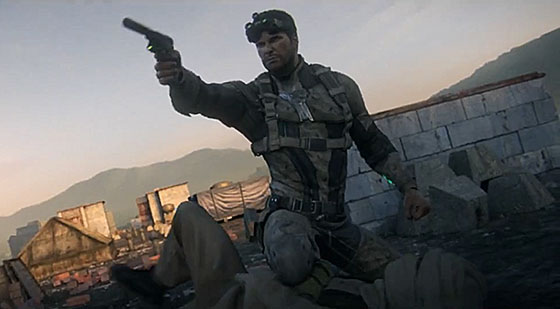 C'mon, that's not fair. You know I can't shoot straight in the middle of the day. Can't we do this when the sun goes down at least?

There are also a number of enemies with extra armour on. This means that even if you put them on mark and execute, if they are wearing a helmet, they wouldn't be executed. You would think then that if the majority of their armour was on their head, they would be more susceptible to body shots. Wrong. Even after putting a number of rounds into an enemy, they could still be seen staggering around and putting up a fight. So if you're looking for any kind of realism when it comes to downing enemies, this will come as both an annoyance and disappointment.

Another area that seems lacking is in the take-down department; the last game allowed you to climb buildings and pull numerous baddies out of windows, which is actually good fun. This time round however, those opportunities are scarce. In fact, as the mark and execute command is so flimsy, there's very little need to climb up pipes and hang off ledges anymore, which forces you to even more sneaking around than usual. Great, just what the series needed.

What seems to be more prevalent than usual is how dark Sam's world is. When the disc is first booted up you're asked if you want to download a texture pack to improve your overall visual experience. It's a hefty download, but who wouldn't want the game to look, well, really textured. As it turns out, it doesn't look all that impressive; in fact, it's a possibility that the only textured bits in the game are its black areas, as there are so many of them.

After a while, it all becomes a little dull and formulaic. Sneak around, wait, take a mental note of the guard's routine, try and go in undetected, complete the mission. It tries something different in that you can attempt to play in three different styles: panther, ghost and assault. The truth of it is however, is that the game invariably adapts to the way you usually play, and certainly doesn't force you in any way to change.

Multiplayer is no great shakes either, with all your usual suspects here. It was noticed that spawning took an alarming long time, which would no doubt make those with short fuses drop out.

Considering that Conviction felt like Ubisoft were at least trying to do something a little bit different with the franchise, Blacklist feels like a step or two backwards. The recent Tomb Raider, which was excellent in every way, proves that you really can reinvent a stale, tired franchise. And if anyone needs reinventing (or possibly retiring at this rate), it's Sam Fisher.