Although it sounds like a sure thing now to have Star Trek the TV show make the jump to light speed onto the big screen, the franchise wasn't anywhere near how it is now, back in the late seventies/early eighties, as Star Trek: The Motion Picture proved.

The TV show was enjoying cult status, having only aired for three seasons and 79 episodes in total. And its big screen debut wasn’t the big box office success that was hoped for, despite making nearly $140 million at the box office with a budget of $44 million.

But with a major caveat, Paramount greenlit this second outing for the Enterprise to boldly appear at the cinema once again. 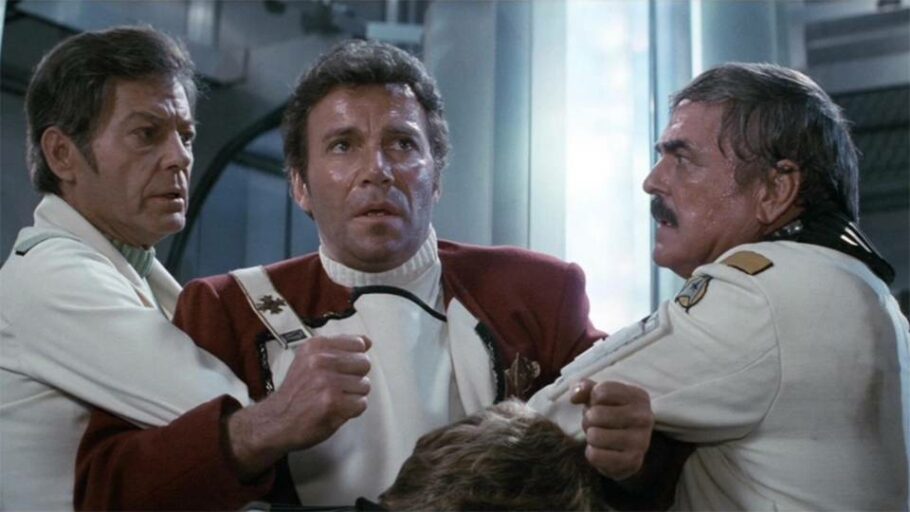 Stop Bill, he didn't mean it about your hair!

Celebrating a somewhat unusual birthday is one James T. Kirk (William Shatner); it’s different because he’s spending it at home for a change, instead of on his ship exploring galaxies; he’s on light duties for Starfleet, acting as an inspector of the fleet.

It’s while inspecting his old ship, the Enterprise, that he learns that the crew of the Reliant, including Commander Chekov (Walter Koenig), have run into trouble on their current mission.

Of course Admirable Kirk chooses to immediately take charge of his old ship, and discover what has happened to his old friend and the Reliant.

Chekov had been exploring lifeless planets as part of the research for Project Genesis, run by Dr. Carol Marcus (Bibi Besch) – whom Kirk knew intimately. It turns out that the data he and the crew received about the planet was part of a trap, where an old nemesis of Kirk’s, Khan (Ricardo Montalban), had been waiting fifteen years for revenge, and now his time has come, with his prey unknowingly on his way to him.

I don't believe it, how did they steal our dance routine?!

Paramount allowed a sequel to the first film on one condition – it had to be cheaper. It was considerably cheaper too, at a mere $12 million, a whopping $32 million less than the previous film. And sadly, it shows.

Director Nicholas Meyer, with only his second feature, really had his work cut out. And although he did the best he could, this film looks more like an extended episode of one of the TV episodes more than any other entry.

Many of the visual effects are downright embarrassing, that must have been just as laughable on its initial release in 1982, and they haven’t aged well at all. Even the Enterprise looks like it’s had a downgrade since the original, looking like a children’s kit toy knocked up in a hurry, looking plastic and new.

What does work for it is its sense of familiarity; all the crew are back together, and there’s something just comforting about seeing Kirk, Spock and Bones on the bridge of the Enterprise.

The story is a little more action oriented this time around too, although not necessarily superior. It does feature two very interesting plot points however, that really test Kirk emotionally.

The film also happened to be the big screen debut for Kirstie Alley, who wouldn’t become a household name for another ten years or so before her appearance as Rebecca in Cheers.

There was also a role for child star Ike Eisenmann, who starred as Tony in Disney’s 1975 classic live action film Escape to Witch Mountain, looking exactly the same a few years on in his career.

Despite its paltry budget, the film went on to make an impressive $97 million, which no doubt convinced Paramount that perhaps this franchise had legs after all.

Although far from being a looker, this sequel is work another look again on both the big and small screen, because although its effects are far from special, its story boldly goes in a bold direction, making it worthy of another opportunity to jump on board.