Here’s a little science fact for you: the International Space Station launched in 1998 and since then it has been occupied continuously for over 20 years.

Obviously this throws up all sorts of questions, but the most burning one for us is this: what do they watch on movie night? For instance, have the astronauts on board ever watched Alien in space? Are there films that are on a no-watch list? Like 2001: A Space Odyssey? Or Star Wars: the Phantom Menace - not for its space setting you understand, but just for being really rather bad.

If there were a list, then it’s likely this latest Netflix original Stowaway would be added to it, as it features astronauts in a bit of a space pickle, that the ISS team don’t need to see. 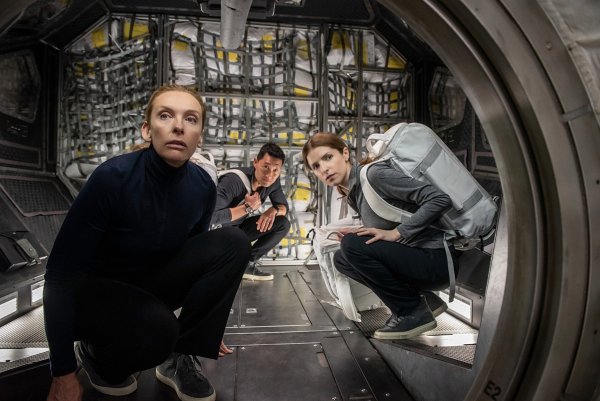 They didn't allow for how tricky playing Hide and Seek can be in space...

Embarking on a new adventure in space are Commander Barnett (Toni Collette), biologist David (Daniel Dae Kim) and medical researcher Zoe (Anna Kendrick), as they set off to join the space station MTS-42. From there they’re expected to journey onto Mars for some important research that will hopefully lead to colonising the red planet, on what will be a two year mission for the crew.

Docking with the station seemingly goes well, until something rather unexpected happens; they come across Michael (Shamier Anderson), a member of the ground crew at take-off, who somehow found himself inexplicably aboard their ship, like some unfathomable overhead luggage item.

His arrival causes some alarm however; when discovering his appearance, it causes damage to the system that deals with oxygen throughout the ship, with the upshot being that they now only have enough oxygen on board for three crew members to survive.

This leaves the original members of crew with quite the dilemma to mull over; how are they to survive if there isn’t enough oxygen to go around for them all? 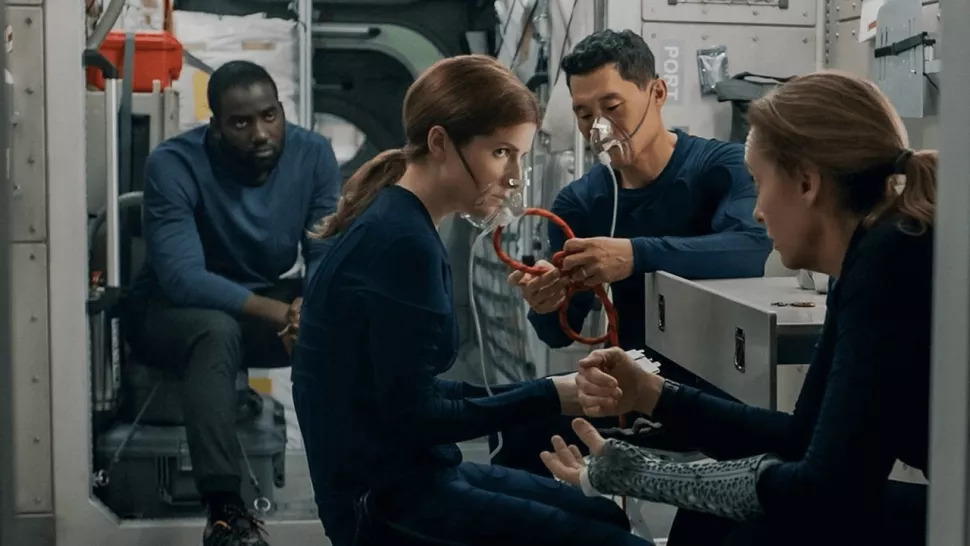 I told you before, farts in space can be deadly!

Due to the fact that the science fiction genre has a license to push the bounds of believability almost by definition, audiences are always seemingly willing to accept some leeway in terms of how much bullshit can be swallowed in space. Unfortunately for Stowaway, it pushes its luck way too far with what is without doubt a preposterous premise.

The real bug bear is, how does someone accidently find themselves stowed away on a space ship like some immigrant making a break for it across space borders? It’s not just the fact that no one noticed an extra body aboard the three-person crewed ship, but the fact that the stowaway can’t recall how it even happened. Perhaps space travel causes some kind of amnesia that hasn’t materialised in space travel canon yet, but it just doesn’t make any sense.

Brazilian director Joe Penna continues his theme of isolation from his 2018 debut Arctic, with this space journey. However, after you get over the absurdity of the plot, Penna’s script that had an element of peril, quickly descends into what is less a big bang and more of a whimper in its finale.

It’s also unfortunate that the budget, despite coming from Netflix, didn’t quite match up to blockbusters such as Gravity, which is reflected in some dubious not-so-special effects. One thing is clear and that is weightlessness doesn’t come cheap; at one point the crew are reminded that gravity doesn’t really take hold outside of the ship until you get some distance from it, which leads to a number of awkward shots that look more like a gentle stroll to the shops than a space walk. There’s even one or two shots that have the look of sixties Adam West Batman ‘scaling’ the side of a building, just by turning the camera on its side. All in all, just a bit too hokey to be taken seriously.

There’s no doubt that some would be willing to overlook the illogicality of the stowaway angle if it at least lead somewhere, but it doesn’t.

It may well be the case that in space no one can hear you scream, but the same can’t be said on Earth in front of your TV as that gargled air leaves your lungs at volume at just how absurd and disappointing Stowaway Is.