If you have ever been in a casino then you’ll know what soulless, depressing venues they are. Sure they look exciting in films, but the reality is far more sombre and sobering; natural light is banned so that punters aren’t aware of the time of day it is - therefore how long they’ve been on the premises losing for – as customers pour their hard-earned cash into hungry slot machines with no intention of paying out big.

And if you’re stupid enough to venture onto the tables, the odds are overwhelmingly stacked against you, as the house invariably wins, more often than not. And yet you will always get the sad saps that have a feeling they can take the house on.

There are a small number however, who know how to play the system, and get away with it for the most part, which is the premise for Paul Schrader’s latest film. 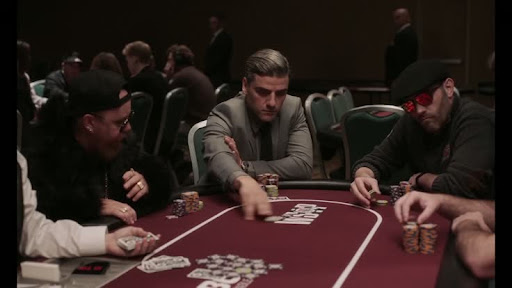 There’s a technique that can make you a winner at the tables of casinos, and William (Oscar Isaac) knows it well. It’s called card counting, and although frowned upon by casinos, William knows that he plays often and walks away with small winnings, they tend to turn a blind eye.

It’s a skill he had plenty of time to master, as he spent a considerable period in Leavenworth, a military prison, where he did a stretch for his part in interrogation techniques used on US soldiers, as a way of preparing them for the real thing if caught behind enemy lines. But when pictures of him essentially torturing soldiers got out, he had to take the fall for those higher up the command chain.

Two people enter his life, who change his routine, for what initially seems the better, but it can’t stop his past from catching up with him and haunting him further. 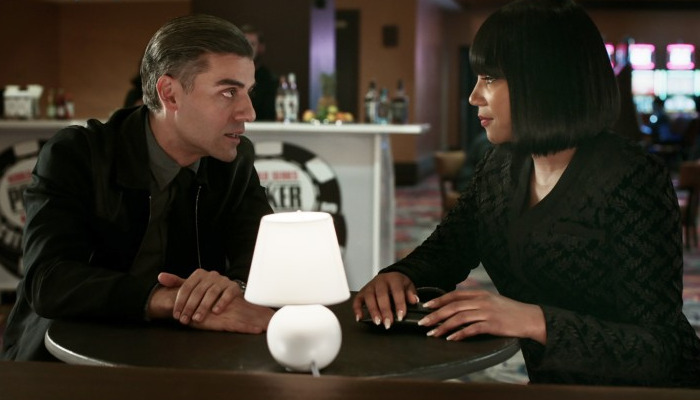 I'm sorry, but i can't express how much more i love this Ikea lamp than you.

It feels like Oscar Isaac is an overnight sensation, with him featuring in a number of big Hollywood films in the last few years. The fact is, he’s been a jobbing actor for the last twenty years. This is certainly his time to shine, and that’s even including him starring in the recent pile of sandy tripe Dune.

Schrader’s film is not a commercial feature, despite Isaac’s involvement. In a sense it’s a modern noir, with Isaac as the struggling protagonist, being led to an inevitable conclusion. There’s even a femme fatale, of sorts, by way of la Linda, played by Tiffany Haddish. In a way the film includes a homme fatale, Tye Sheridan’s Cirk AKA the Kid, who William takes under his wing in an almost father figure way.

The film is made up of two parts; one is that of William the card counter in present time, and the other is his past life as an interrogator. At times there is a sense that these two parts are at odds (as it were) with each other, where perhaps the film would benefit from following one story arc or the other. With both of them included, and not quite gelling as a whole, neither really fully reach their potential.

Schrader’s direction is methodical, as expected, and rarely ever changes from its relatively low gear throughout. In fact even during one of the film’s most climatic scenes, Schrader adopts a less is more strategy, which should prove to be disappointing, but as it is, is highly effective.

Even though Isaac’s character very rarely shows his hand emotionally, the actor is completely compelling, as is so often the case, making the film one worth a punt for his performance alone.

A slow burner for sure, with a retro, old school mentality, The Card Counter may not have a huge payout story wise, but there’s enough here to make it overall a rewarding experience.