The Electrical Life of Louis Wain

Cats. Love them or loathe them, they’ve been around for thousands of years, displaying their obvious indignant attitude towards mankind with a flick of a paw, or an expression of sheer boredom on their cute furry faces.

And yet surprisingly they’ve only been domesticated as pets in the UK fairly recently in history. Someone who certainly helped promote their popularity was artist Louis Wain, with his colourful portrayal of the feline species towards the end of the 19th century. 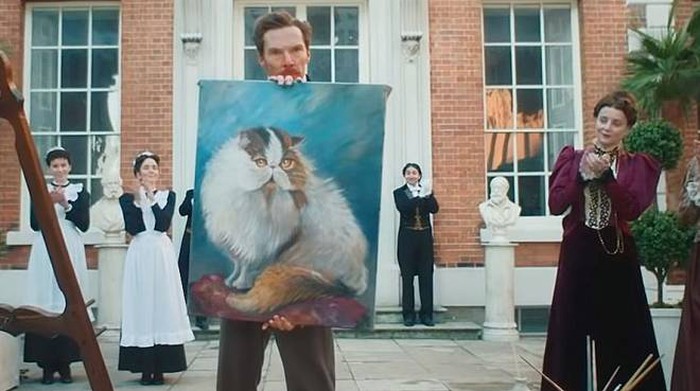 Is this the cat you were thinking of?

Many artists have an area of speciality and for Louis Wain (Benedict Cumberbatch) it was animals. He made a living as a freelance illustrator for a number of news papers, where he would produce detailed paintings of fancy English homes and estates, as well as the livestock they owned.

He had to keep busy as he had five sisters he had to support, being the only man of the house. To help out with education matters, a governess was hired, Emily Richardson (Claire Foy).

Her arrival to the Wain home sparked romantic interest between them, and despite the obvious social differences, and the gossip it generated, they became an item.

It was when they were setting up home together that they discovered a kitten in their garden, which soon became a member of their family. Its arrival marked the beginning of Louis’ fascination for cats that soon took over him creatively.

Some are shocked that I can paint in mid air, but they're forgetting I'm Doctor Strange.

Sometimes it’s all too easy to forget just how remarkable an actor Benedict Cumberbatch is. He is an extraordinary talent that is almost too easy to take for granted. Obviously his profile, and of course his bank account, benefit greatly from being part of the Marvel ‘family’, playing Doctor Strange as he does.

The role affords him the luxury of playing more intimate roles, such as his recent turn in Jane Campion’s recent The Power of the Dog, where he was in terrific form as a truly grotesque cowboy, and now this.

Playing Wain allows Cumberbatch to explore his more sensitive side, with a definite quirky bent. His Wain has more than a little of the mad professor about him, coming across as an adorable eccentric.

His performance is certainly aided by Will Sharpe’s direction, which seemingly comes by way of binge-watching a number of Wes Anderson’s films. For instance, the screen format is shot in 4:3, which is more square than wide, and reflects the shape of an artist’s canvas. It could be considered a little on the pretentious side, but there’s no denying it works within the themes and structure of the film.

If anything, Sharpe’s direction is playful more than anything else. It’s only the actor/writer’s second feature directing, and yet there’s plenty going on visually, as he displays a surprising level of confidence for someone with so little experience behind the camera.

Cumberbatch is thoroughly entertaining, and yet he still has to compete with the cuteness of his furry stars. Thankfully Sharpe goes for a very organic approach, as use of CGI would have been woefully inappropriate.

It’s a fascinating tale, one that is quite remarkable in that one man could play such an integral part in making cats must-have pets in British society, just through his art. Of course those not terribly fond of felines probably wished Wain hadn’t focused so much on kitties, but let’s face it, it could have been much worse – what if he focused on snakes instead?