The Kid Who Would be King

After his generally well-received (not by us, it has to be said) directorial debut, 2011’s Attack the Block, big things were expected from Brit Joe Cornish.

It’s fair to say he was in no real hurry to produce a second film however, as this feature, eight years later, is it. Again he has decided to both write and direct, with this story based on Arthurian legend, brought up to date.

OMG - are they real boobies?!

When young Alex (Louis Ashbourne Serkis) jumps in to put a stop to his best friend Bedders (Dean Chaumoo) from being picked on by the school bullies, he soon becomes their new target.

Scuttling off as quick as he can, he finds refuse in a deserted building site. There he discovers a sword, embedded in a large rock. His curiosity gets the better of him and he gives it a tug; remarkably, with very little effort, he manages to remove it and decides to take it home.

Little does he know that in doing so, he has awakened the evil Sorceress Morgana (Rebecca Ferguson) – half sister to the king known as Arthur – who sends out her evil underlings to bring the sword - Excalibur - to her.

When he returns to school, Alex is confronted by a geeky new arrival ; he informs him that he is in fact Merlin the magician, and has come to help Alex – heir to the throne – defeat Morgana and her dark army. If he doesn’t, Britain will become an island of slaves. So at the tender age of twelve, Alex has to recruit an army of his own if he is to save the country from certain doom. 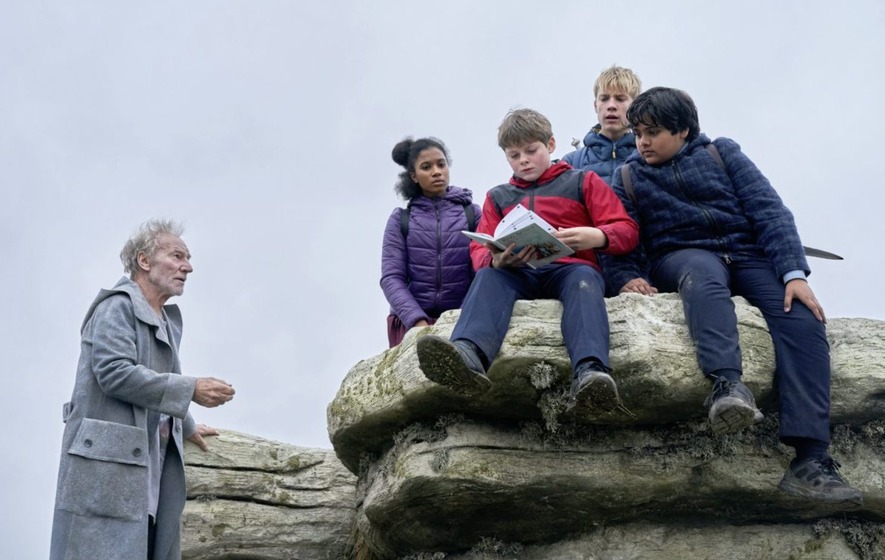 Just tell me if I get a name check - even if it's just the once.

There’s no denying that the premise is a fun one, it’s just the stale delivery that makes it all rather lame.

It feels that Cornish isn’t quite in tune with today’s youth, not by a long stretch. His students in this film, who all appear to be Hogwarts rejects, would positively shit themselves in a real comprehensive. At one point, one of his bully characters comes out with the following line - “What the flip has happened?”. It’s this kind of dialogue that manages to make eighties kids drama Grange Hill edgy.

It’s so incredibly twee that you half expect them all to sit down in a meadow and have lashings of ginger beer. What it sorely misses is that Pegg and Frost contemporary touch; it needed to have some relevance to kids other than those little darlings who attend Sylvia Young’s theatre school. Even then, a majority of the performances here are remarkably stiff and stilted; it all feels like the latest effort made by the Children’s Film Foundation, which is not a good thing.

Considering what a huge influence British talent is on the US, it’s astounding that we’ve yet to make anything in a similar vein to a fantasy kids film like The Goonies or even Stranger Things, etc.

In its favour are some rather impressive visual effects, that wouldn’t look out of place in a big budget Hollywood feature, it’s just disappointing for everything around them letting them down.

Cornish clearly has the talent to produce interesting projects, but he definitely wasn’t up to the challenge of taken the sword out of this particular bland stone.