It’s difficult to fully understand why, but there appears to be a general consensus that Kumail Nanjiani is perfect buddy movie fodder.

Maybe they feel that he can’t be trusted on his own, and needs supervision, or, worse than that, he simply can’t carry a film by himself. He recently teamed up with last year’s Stuber opposite Dave Bautista, and then he coupled up in 2017’s The Big Sick.

He reconnects here with that film’s director, for his latest buddying up flick, that sees him couple up with Issa Rae in this quirky rom-com. Are you sure the invite meant this kinda fancy dress?

After four years of being together in New Orleans, Leilani (Rae) and Jibran (Nanjiani) have reached that point in their relationship, where it’s clearly drawing to a close. The problem is, neither has expressed it out loud to the other as yet. Until now.

It transpires that this joint realisation turns out to be a momentous occasion. Not for the fact that they finally admit to how they feel about each other, but because Jibran knocks a cyclist over in their car as they’re driving having the discussion.

Thankfully he’s OK – well, he is for a bit, until someone else comes onto the scene and makes the situation that little bit worse, to the point that the said cyclist is now an ex-cyclist.

Instead of turning themselves into the cops and explaining the bizarre set of events, they decide to go on the run and attempt to solve the mystery themselves, to put them in the clear. But as neither exactly have any detectiving experience, their attempt to get to the bottom of it all, doesn’t go to plan. 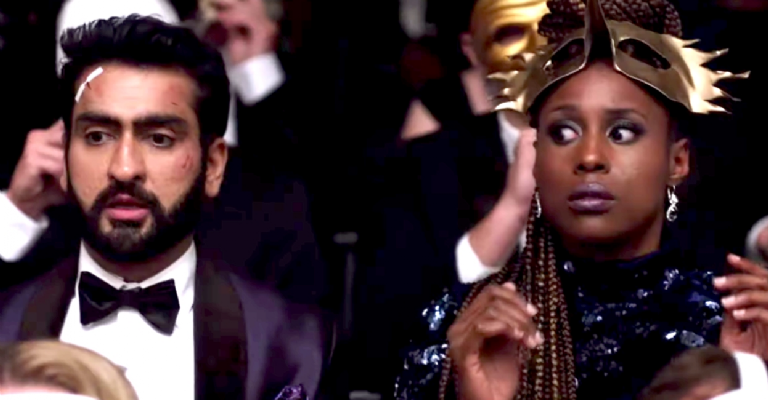 Did he really just give his award to one of the kids from Stranger Things?

As the film begins, it has the hallmarks of being both an agreeable and enjoyable rom-com. Not long in however, and it takes a curious turn. Not content with being simply a sharp rom-com, the film undertakes a gear change or three, by also attempting to add a crime element.

The problem is, this shift, that happens fairly early on, is all too jarring, throwing in an unnecessary genre just for the hell of it. This extra element soon makes the film far stodgier than needs be, to the point where it actually makes what would normally be a zippy running time of 90 minutes, into slow-running treacle.

There’s certainly an enjoyable chemistry between the two leads, with some cheeky dialogue exchanged, but with the crime-heavy plot thrown in, it just feels like one genre too many for the film to handle. It's like a cynical remake of Hart to Hart for dating millenials - "when they broke up, it was moider".

It doesn’t feel like the criminal element was terribly well thought out either; it’s all rather clumsy, adding absolutely nothing of interest to the plot.

Kudos to director Michael Showalter with an attempt to produce something other than a bog-standard rom-com, but in retrospect, if he had gone down that particular road, there may well have been a far better film at the end of it.

Although this buddy flick has its moments, perhaps it’s time for Nanjiani to go it alone, if he’s to have any chance of keeping that spark alive, and that precious relationship with audiences going.