Before the release of 2017’s Get Out, not many held out much hope for it; after all, it was written and directed by Jordan Peele, who, only a year before, was mostly responsible for the dire effort Keanu, a comedy that was about as funny as having your face ripped off by a horde of ravenous feral cats.

Peele however, clearly saved his A game for this project, that not only impressed audiences, but by being championed by the Academy, somewhat surprisingly, who nominated it four times, as well as presenting it with an Oscar for Best Original Screenplay.

With such attention, comes a certain amount of responsibility, and there must have been some pressure on for his follow up. And although he was probably offered several bag loads of cash for a sequel, Peele went backed to his laptop and created this highly original effort. I only popped out for a pint of milk and Jaffa cakes - now look at me!

The Wilson family are just arriving at their summer retreat for their vacation. It’s a little out of the way, but is close to a lake, and only a short drive from the beach in Santa Cruz.

Hubby Gabe (Winston Duke) is looking forward to taking the kids Jason (Evan Alex) and Zora (Shahadi Wright Joseph) down to the beach, but his wife Adelaide (Lupita Nyong’o) is less keen; she had a traumatic experience there with her own family when she was small, and has no intention of going back anytime soon. Gabe pulls out all the stops to make her feel bad however, so Adelaide caves in and agrees to go.

One night, when all the family are getting ready to turn in, Jason notices a family standing in their driveway. Gabe takes it on himself to pop outside and ask them kindly to move on, but soon realises they are oddly stubborn. The situation soon escalates and the Wilsons soon find themselves on a holiday from hell. 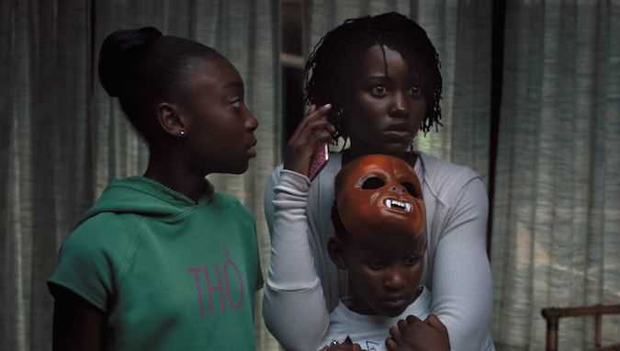 Who told Bob he could do his The Color Purple mime?

So here’s the good news: it seems that Get Out wasn’t a fluky debut hit. Even better news is that with this effort, Peele is proving himself to be an exciting prospect in the world of film – behind the camera at least.

Us is an elegantly scripted thriller that plays with the concept of the doppelganger, whilst setting it within the realms of a home invasion. On one level it portrays a family under attack from eerily familiar foes, and on another, it toys with the idea of inner conflict. Either way, it works incredibly well as an absorbing tale of duality.

Peele has created a film that, if written sixty years ago, would have had Hitchcock sell his long-dead mother for, in the hopes of directing it. His script is full of suspense, with just the right amount of twisty-ness to it. And Peele the director also plays with the essence of the cinematic twin, with a myriad of reflective imagery to continue his themes.

He also gets some superb performances from his cast; Nyong’o especially is spellbinding throughout, in both her guises.

It’s one of those smart films that, like the premise of the film, has two faces. There is the one that you can enjoy analysing it to death, discussing the theme of the multiple self, or dissecting the meaning of Jeremiah 11:11 (Therefore thus said the LORD, Behold, I will bring evil on them, which they shall not be able to escape; and though they shall cry to me, I will not listen to them). And then there’s the exhilarating date night flick, that will send a ripple of fear through the butt cheeks of all those that see it.

Either way, it is a remarkable follow up to an impressive debut, marking Peele as a serious talent with a promising future ahead. We’re not sure where he’ll take us all next, but wherever it may be, we’ll be right behind him, holding something pointy, just to be on the safe side.