It's truly remarkable how far the game industry has come with the ability of storytelling. From controlling small pixelated characters (who of course, are back in vogue with the current spate of RPG’s such as Triangle Strategy and BravelyDefault II) to the impressive visuals that drive many a strong narrative. It’s no wonder that the games industry is currently more lucrative than the film industry.

Blurring that line a little more between a cinematic experience and a video game is As Dusk Falls. 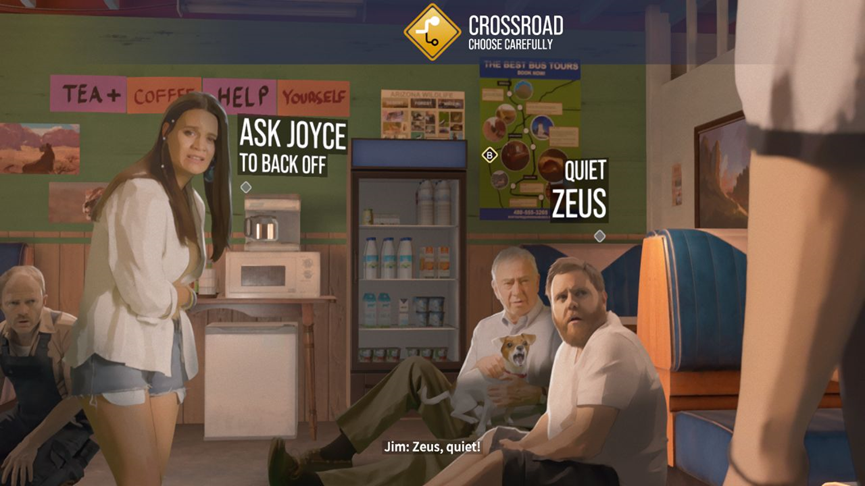 Just once I'd love to make a decision of my own. Sigh...

Its story, of events that take place in a remote motel in the Arizona desert, is certainly one that Hollywood wouldn’t turn its nose up at. Not only do we see things play out before us, but just like a film, there are a number of flashbacks to give more texture to the on-going story.

The game also focuses on a number of characters throughout, for whom you will make decisions for, but the most consistent one is 18 year old Jay, as it’s his arc we essentially follow from beginning to end.

So how does the game work? Well, the best way of explaining it, is that it’s an interactive graphic novel. It has a striking visual look that many apparently have struggled with, that resembles a panel in a comic, but with some movement – although never facial as you don’t see characters speak, you only hear them – with the relevant dialogue played over the top.

As scenes play out, you are prompted throughout to interact, either by making decisions, as to how to answer a question, for example, or an input for an action, such as bashing the A button to move out of the way of an oncoming object. So deciding on your response, a particular route in the storyline you will follow. This means that the story you participate in will be relatively unique to you, and others you’re playing with if you’re indulging in a spot of multiplayer. And to illustrate your particular run through, you’re presented with the path you took, and how many others have taken the same path for that specific chapter, with a tree diagram at the end. 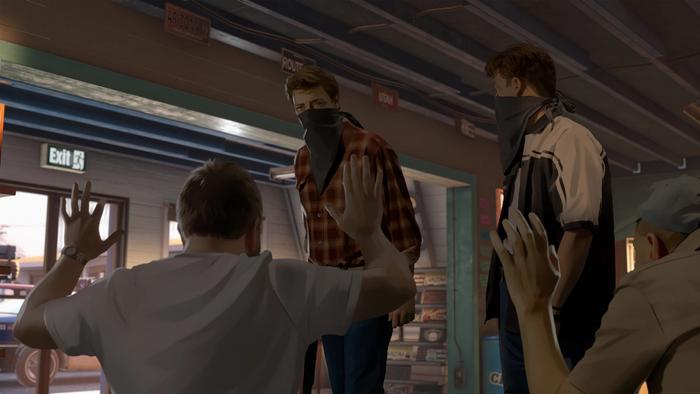 Oh we're not robbers, this is our Covid look!

Having played through the entire thing, taking between 6-7 hours to play through, you can then decide to either go through the whole game again and choose different paths to see different outcomes, or jump in chapter by chapter. There was one scene we were particularly curious about, with three different options to play through at a crucial point in the storyline. So we played through all three, only to be disappointed with the same outcome for each path. This happened a few times, seemingly making those choices disappointingly redundant, with your choice making absolutely no difference to the outcome.

And strangely, there were a few options we struggled with in terms of input. For instance, at one point you get to hotwire a car, for which you’re given a number of controller prompts to follow. They’re all fairly standard stuff, but for some reason, one – where you have to rotate the right thumbstick in the right direction within the time limit – eluded us. It may well be a hex on being left-handed, as all the prompts came from the right thumbstick; we even did it a few times, quitting the scene before it saved to re-play it, only to continue to struggle. It’s more an overlook of an accessibility issue; after all, left-handers should have equal rights in gaming too.

The good news however, is that you can actually use your smartphone as a controller, which can certainly come in handy if a number of you are playing at the same time in the same room, with up to eight players in local co-op mode available. But be warned, we chose to play with a smartphone, and with one solitary input not responding on our screen, it caused the death of one of our favourite characters. Again, this could well be down to the curse of being left-handed, but in any case, it’s something worth remembering. To that end, having a choice, we preferred using the controller.

It has to be said, we fell in love with a number of characters, more so than the overall story, which made us go back to certain sections, to play through with them to get a different outcome. And it’s this control that makes it a unique experience, more so than just watching a film.

Our biggest complaint however, would be that there just isn’t enough interaction. There are long periods of time where you are just watching the story play out, and when the occasional prompt did pop up, it was often for a bland response to a question, or an action that’s outcome made no difference whatsoever to the storyline.

With rich characters and a compelling story/stories, As Dusk Falls is a unique interactive gaming experience. Sure, it doesn’t always work, and its finale is definitely on the disappointing side, but the overall journey with all these dysfunctional characters is a fascinating one.