There was something quite sweet and charming about Grand Slam Tennis on the Wii. The cartoon-like representation of some of the greatest tennis players of all time was a nice idea. But it didn't distract from the fact that, thanks in part to its use of the Wii's MotionPlus control support, it played really well.

There was talk at the time (way back when in 2009), that there would be a version for the 360 and PS3, but they never materialised. Instead both consoles (and not the Wii this time around) are greeted with the sequel.

But really, it's only a sequel in name. Gone are the cheeky caricature players; they are replaced with more realistic forms of the tennis pro's. This is a huge disappointment, as the look of the original was part of its uniqueness. Another of course, were its controls, which have also been replaced with your bog-standard controller (although it is Move compatible with the PS3 version, but no Kinect-ness for this 360 one though).

But despite all these negatives, this is at least a sequel that has seen it evolve from the first game, and let's face it, not many sporting sequels can say that. 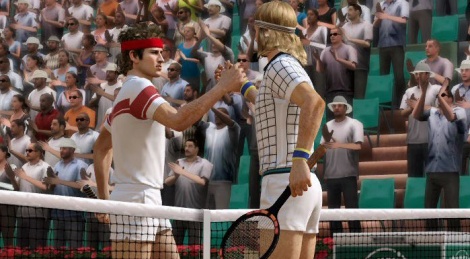 Alright, so we've played tennis, now we're arm wrestling, so I reckon we should see who's best at paper, rock, scissors next.

The biggest difference here is in the controls. Gone are the usual gauge/power meters, with perhaps spin and slice added by way of a shoulder button or triggers. Instead, the right thumb-stick now takes care of all of your control and power needs. In principle, it's such an innovative idea, the real surprise is why it hasn't been done before. The answer may lay in its practical usage.

So, moving your player around remains unchanged with the left thumb-stick. Flat returns with the right thumb-stick are easy enough; move you player towards the ball and then push forwards in the direction you want the ball to go. Where it starts to get a little confusing is when you add spin and slice to your shot. Both have a distinct action to get it to work, unfortunately it's like trying to get a car you've never driven before into various sticky gears.

Ironically you may not notice it that much during normal game play (or possibly rely on it that much for that matter, due to the game's questionable difficultly level  or lack of one), but you'll certainly be put through your paces if you happen to wander into Tennis School. Here, under the tutorial-age of the great John McEnroe, you get to test all of the different ways to play. The problem is, you only get a set number of balls to complete the challenge, so if you get it wrong, you start again. Normally this kind of thing wouldn't really be a problem, but because of the unusual knack of controlling some of the moves, it feels like you'd have better results if you were blind-folded as if it were some kind of Jedi mind trick.

But as mentioned previously, you don't have to have a real grip on the controls to play the game. In fact, to date, we've yet to lose any matches to any player in the career mode, and that's playing deep into a second year with all the Grand Slam trophies under our belt. Of course nobody actually likes losing, but it could certainly do with being far more competitive than it is.

We could just be Gods of the tennis courts, who are gracious enough to play amongst mere mortals. This would indeed be the case if we didn't venture online. Suddenly, every player we came across was a hundred times better than us. And sadly, that FIFA mentality of constantly facing players who choose Barcelona every single game can be found here too: Oddly no sign of Federer or Nadal  Djokovic is the new Barcelona. So perhaps it was only us struggling with the right thumb-stick, as those we played online certainly didn't have any problems.

We never thought we'd say it but we kind of miss the mini-games that could be found in the likes of Sega's Virtua Tennis title. All you get here is tennis game after tennis game. You have to give the game a little credit though, it gives you quite a few options to play. There's the career mode, and exhibitions, and of course the challenging Tennis School. There's also the ability to take part in classic tennis encounters of the past, with the opportunity to change history.

Pat Cash reprises his role as commentator throughout, but this time he's joined by the legend McEnroe. The first couple of games you play it feels pretty close to watching a game on TV; however, the more you play, the more irritating their familiar remarks become. The game's constant ESPN product placement is also disappointing.

There was one slight niggle we found with using the right thumb-stick, and that there was, on occasion, a response we term dead stick; this usually manifested itself during a big shot that definitely needed to be played to either win or save a set, and despite pushing the stick, the player didn't respond. In fairness this didn't happen often, but often enough at crucial points to cause a snarl or two.

But kudos for trying something different. The new control system isn't perfect  unless you're winning all the time, then good for you  but at least it's a genuine attempt at serving up an alternative way to play the game.

On the bright side, your opponents in all tournaments are comprised of current players as well as legends of the game like McEnroe and Borg. Although this is a nice addition to the game, and one of the few elements to make it from the original, it's still a little disconcerting to be playing Rafa in one game and then someone like Borg in the next.

Grand Slam Tennis 2 may well have lost some of its charming cutesy-ness, but it's certainly got balls for trying to move the controlling system forward. It might not be the definitive tennis game it's trying hard to be, but it puts an interesting spin on the standard tennis game.