2004 saw the show Entourage hit our screens. It was about a young man who was getting his big break in Hollywood, and his journey as an actor, surrounded by his friends who became his personal entourage.

It was a breakout show for a number of reasons, most noticeably for its revealing take on the inside of Hollywood. There were two standout roles however, agent Ari, played by Jeremy Piven, and Johnny Drama, played by Kevin Dillon.

In a role where art imitated life, Dillon played the older acting brother to the more successful younger acting sibling; despite being two years younger than his more successful bro Matt in real life, the parallels were obvious.

Since then, Dillon’s career hasn’t exactly had the highest trajectory, but, like his character Drama, there’s a sense that there’s still hope for some big part on the horizon. And with a co-star of none other than Mel Gibson, who’s to say this isn’t it? 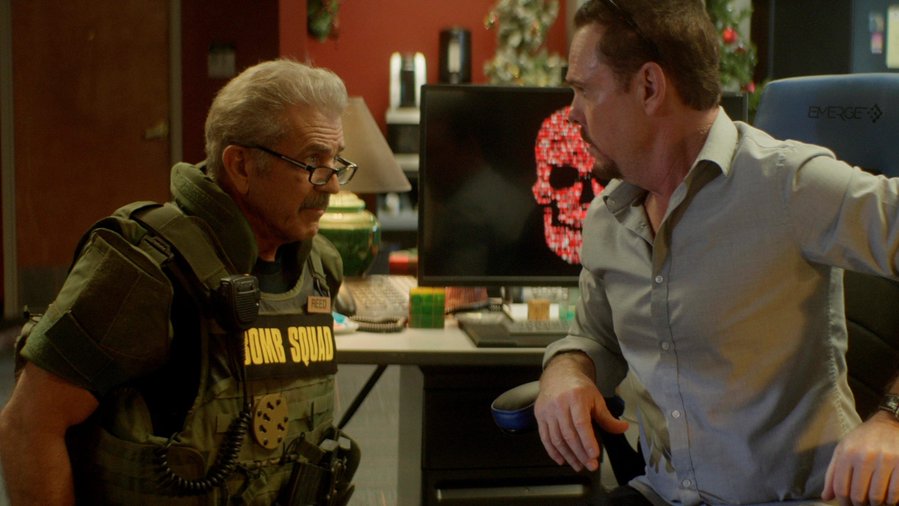 Oh this is just a side hustle, no need to worry, I was in Lethal Weapon remember?

Although it’s his daughter’s birthday, Orlando (Dillon) finds himself having to go to work, much to the dismay of his wife Kim (Lydia Hull). He’s one of those tech guys on the end of the phone, that you phone up when your internet is misbehaving.

It feels like he’s going to have a quiet day, as its during the holidays, but it takes a turn when he gets a call from hell; he’s informed that he has to break into some high level security or the bomb under his seat will go boom. Of course, even if he tries to get up, the bomb goes...boom. Despite sounding implausible, he’s just the IT guy after all, Orlando checks under his seat only to confirm that there is indeed a bomb there.

He wasn’t always just the IT guy however, as he was once a renowned hacker, going by the name Red Knight. It seems that this guy is fully aware of this fact, and a whole lot more about his life, which is why he’s forcing him to use his previous skills for nefarious means.

There’s nothing Orlando can do, so it’s fingers crossed then that the bomb squad, lead by Wallace Reed (Gibson), may well be his only hope. But with his actions very much against the clock, will they be able to save him in time? 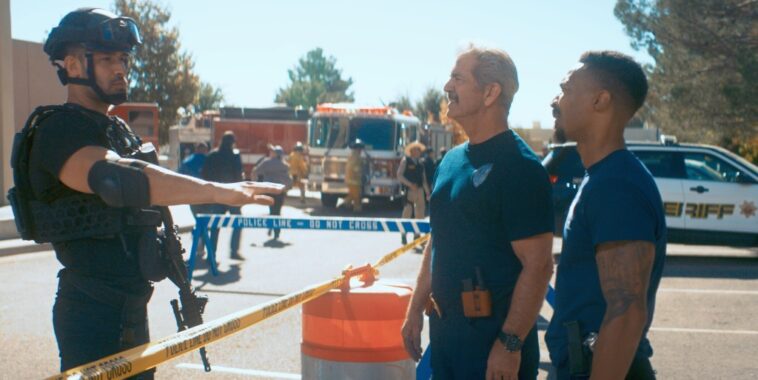 Sorry Mr Gibson, like I said, this is for A listers only...

It won’t take you long to suss that this is somewhat of a homage to the Saw franchise, albeit one with hardly any budget. In fact the whole thing plays out like a student film, which just so happens to have one of the biggest Hollywood names of all time in it by way of Mel Gibson.

The whole thing is criminally amateurish, with a script that comes across that it was conceived by way of some boozy drinking game.

In fact, the whole thing resembles just the kind of feature that Johnny Drama would end up doing – the leading role in a terrible film.

It also appears to be a film where other actors with high profiles have ended up, like some kind of on screen support group; alongside Dillon and Gibson, you also have Shannen Doherty from Beverly Hill 90210 fame, as well as Eddie Steeples from the excellent My Name is Earl, where he played Darnell, aka crab man.

And although it’s sadly not a shock to see Dillon involved in this C(/D) – movie, it is disappointing to see someone of Gibson’s calibre on board. It’s neither a big or crucial role, and as the film doesn’t look the highest of quality, and therefore not the biggest of budgets, the production team must have something pretty juicy hanging over him to make him do this, and with Gibson’s shady past, that could be anything. And to think, it was only a couple of years ago when he starred in The Professor and the Madman opposite Sean Penn, and the excellent Dragged Across Concrete. Still better days may well be on the horizon, as he’s to star in the John Wick TV spin-off The Continental, which quite frankly can’t come soon enough after this cheesy debacle.

But much like Drama, Dillon doesn’t really have a say in the type of roles he gets, he is after all, just a jobbing actor like his TV counterpart, so he can’t be at fault for what is essentially just another pay check.

Kudos to director James Cullen Bressack though, who is not only credited with over 40 features to his name – none of which you would ever of heard of, of course, with titles such as Deadly Reunion, Pernicious, and the classic White Crack Bastard - but has also got names such as Bruce Willis and Steven Seagal to star in them; so it’s obvious that he knows where all the bodies are buried.

To its credit, it is a bit of a car crash watch, in a similar vein to Tommy Wiseau’s films (whose life featured in the excellent The Disaster Artist, although with a higher budget and not as endearing; you can’t help yourself, but the truth is, you really should.