It has only been recently that we’ve forayed bravely into the daunting world of the JRPG, mostly due to the number of releases that have found themselves on the Switch, such as Triangle Strategy and Bravely Default 2.

Another joins this estimable collection, Live A Live, which was originally released in 1994 for the Super Famicom, only in Japan. It was the first game for the now influential Takashi Tokita, who went on to work on the likes of Final Fantasy IV and Chrono Trigger.

Here then the game finally gets its opportunity to woo the western market, with its spruced up visuals and game-play tweaks. 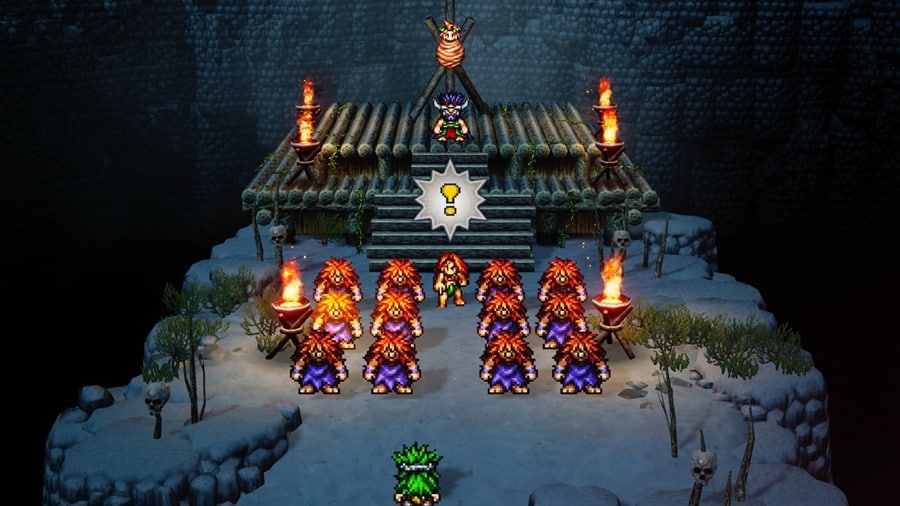 Guys c'mon, what did I say? They'll never let us all into the club dressed the same!

Instead of jumping into one adventure, the game gives you the opportunity to choose a character with their own scenario, from the off. These consist of pre-history (as a caveman), imperial China (as a martial arts expert), twilight of Edo Japan (as a ninja), the wild west (as a cowboy), the present day (as a fighter), the near future (as a young man who can read people’s minds), and the distant future where you play a robot. All these are available to play in any order from the outset, as each one is a self-contained storyline.

This then, is akin to the video game version of the Kellogg’s variety pack; you probably remember them as a kid, where eight individual breakfast cereals were boxed, featuring your favourites like Frosties and Coco Pops, and oddly, Special K, so you could have a different taste, albeit a pokey portion, every day. Playing Live A Live is a similar experience, with each character and their story having their own flavour, with only the eighth adventure being a bit iffy, but more of that later. 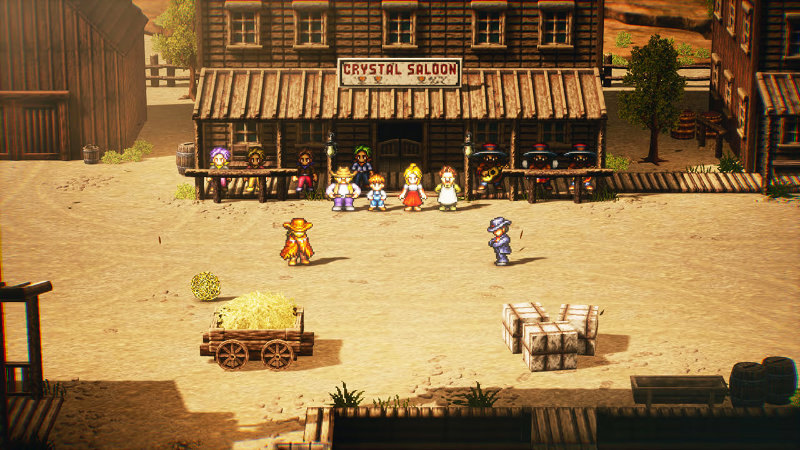 You said the first who draws wins, but where are their easels?

You will no doubt have your favourites, but we can honestly say that we adored every single one, even the rather short-lived present day section, which really only amounts to a few battles as if playing a Street Fighter style game, and no story whatsoever to speak of.

And just with a single day portion of breakfast cereal, you may well be left wanting somewhat, as none of the levels are that long, with the overall game being just around 22 hours to complete, which falls well short of the average JRPG.

But what it lacks in length it more than makes up for in creativity. Each story has a depth to it, and also a fair amount of bloodshed and death, so don’t get too attached to certain characters.

It plays with the whole concept of the RPG, at times even ignoring many of its elements in favour of storytelling, as in the Alien Inspired chapter. But don't panic, the classic mechanic of only having a certain amount of squares for each weapon/power that you have is still very much intact here.

If ever there were a gateway drug into the world of JRPG’s, Live A Live would be it. Although there is a slight caveat to that.

After you complete all the available chapters, two more open up. It’s here that we had a serious issue. Up until this point it appeared that the game was going to be the first RPG that we were going to complete; not that we’ve become competent at playing with them over the months, but rather the difficulty level is on the easier side. Initially at least.

The final chapter is nothing more than a living hell. Suddenly the difficulty level is ramped up to nigh on impossible - for us at least – to the point where we found ourselves in a loop in which we couldn’t escape – a deathloop if you like. All throughout the earlier chapters, we felt we were doing a swell job of grinding and levelling up our characters to the max. And yet when we hit the final chapter, where you have to choose a character from the previous chapters to lead the way, we met one character who took us out with one hit. Every single time. It became so infuriating that we had to finally admit defeat and walk away from a game that we had completely fallen in love with, as there’s no option to retry using another character.

It would possibly help if you have multiple saves on the go, but as we’d got pretty cocky from sailing through all the previous chapters without a hitch, we didn’t think it was necessary. Boy, we’re we wrong. So close, and yet so far.

The thing is, it wouldn’t sting so much if we hadn’t invested so much into the various rich stories and interesting characters on our journey with the game. And if those two hideous extra chapters didn’t exist, it would undeniably be the richest JRPG experience we’ve had to date, but with them, it has tainted our overall enjoyment of playing it.

Hopefully, you’re take on the game will be completely different to ours, and we hope it is, because even with its wickedly difficult finale, Live A Live is something truly special in the RPG world.