Even if you weren't a fan of fighting games, if you owned a Dreamcast, chances are you picked up the first Soulcalibur in the series. It may have been tinkered with slightly for Sega's machine, but it turned out to be one of the most impressive titles for the ill-fated console.

Not only did it stick a large sword in the back of mortal 2D fighting games, but it showed other so-called 3D fighters what fighting in a 3D environment was really about.

It was colourful (albeit somewhat garish), vibrant and more importantly, fun to play. That was 1999.

The franchise has reached the Roman symbol for 'five' now with its most recent release. So what's changed in all that time? Well, not that much, and therein lies the problem.

Essentially it's the same game. Visually it hasn't moved on that much from its origins, with two fighters wielding weapons going at it in a ring. They fight until somebody wins  at least three bouts. And then? Game over.

There's a curious story mode which really just knits a peculiarly woolly story around essentially bout after bout of fighting. Although the hand-drawn artwork is nice, it could be considered a bit of a cop-out and nothing more than unnecessary filler.

Any hardcore fans of the series will note the introduction of a charging meter that, once full, can unleash either a 'critical edge' or 'brave edge'. To be brutally honest, due to the fact that nearly all review code sent out doesn't come with instructions, we never actually worked out how to activate either of these. And it didn't seem to matter anyhow because if you bash the buttons enough, you're bound to win. Of course doing so is neither big nor clever, but it's disappointing that there's no real challenge there. 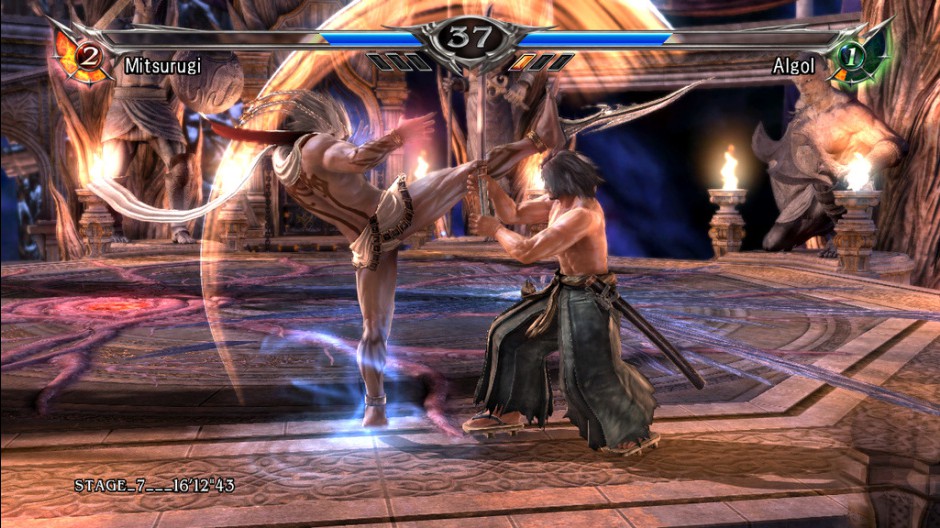 Ah, you see, I can lift my leg above your head. I told you that those dancing lessons with Louis Spence were paying off.

It's probably the type of game where there's subtle nuances in the controls that separates the boys from the men, but quite frankly if that's the case, they're just way too subtle to care about.

At times movement around the ring could feel slightly on the sluggish side, having to really push your character into your opponent to make an impact with your attack. And by pushing your enemy against the edge of the ring, it seemed to make taking them out all the more easy.

And after 2008's Soulcalibur IV saw three Star Wars characters playable (well, Darth Vader and Yoda, at any rate, plus the apprentice character from Star Wars: the Force Unleashed), it's only Ezio from Assassin's Creed that makes a cameo this time around.

We remember fondly playing the game on the Dreamcast, and this is the first time we've returned to the game since then. As a casual player of fighting games, it's difficult not to feel disappointed that the series hasn't evolved in quite the same way as other gaming franchises have. The only changes the game has made, it seems, are minor ones. Its reticence to move things along is ultimately its own undoing.

If you take your fighting games seriously however (and fans of the fighting genre do seem to be as serious as gamers get) then these minor improvements may well just be enough to make this a definite purchase. But for the more casual player, you just might not have enough of a fight on your hands to bother with it .