It’s common knowledge that the Oscars often get it wrong. A fine example of this was in this year’s Best Animated Film category. The category was dominated by glossy Hollywood titles, with the Oscar going to the surprisingly disappointing Disney Pixar title Coco.

The film that should have won was the beautiful Loving Vincent, with this title coming in a very close second. 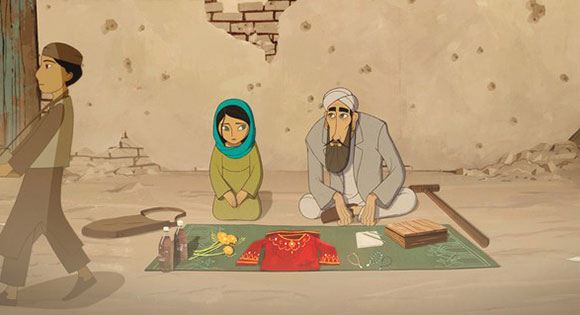 I told you we should have made more of my homemade brownies.

It could be said that it’s difficult enough being a woman at the best of times, but in some cultures they’re given a torrid time from birth.

Young Parvana (Saara Chaudry) lives with her family in Kabul, Afghanistan. Living under the Taliban is far from easy, but when her disabled father gets taken away and put in prison, her family – predominantly made up of females – fall to a whole new level of suffrage. Without an adult male in the family, it’s impossible to buy even food as a woman. Not just impossible, but actually against the law.

It’s only when Parvana gets the idea to cut her long hair, making her appear more boyish, and thus able to pretend to be a young boy, that life gets a little easier. Finally she can put food on the table for her family. But it’s not enough; weeks go by and there’s still no news of when or if her father is going to be released. So she decides that she’s going to do all she can, pretending to be a boy, to get in touch with her father and try to bring the family back together again.

If my goat likes you, then i like you too.

For a film that’s set in Afghanistan, it has a curious pedigree. Not only is it directed by an Irish woman – Nora Twomey – but it’s also a co-production between Canada, Ireland and Luxembourg. Also throw into the mix having Angelina Jolie on board as an exec producer, and based on the books by Canadian author Deborah Ellis, and you have quite an animated concoction.

Although it may not have its physical roots in the Middle East, its heart certainly does. Even if the animation could be described as basic, it doesn’t make it any less effective. Its colour palette, grounded in browns, does come to life with sprinklings of vibrant colour. Many of these come from a prominent element of the narrative that focuses on the power of storytelling. As a way of deviating from the drudgery of the day to day, Parvana and her family lift their spirits in the telling of tales, which come to life in a world of colour.

It’s not often you come across an animation that features the Taliban, after all, you could hardly expect them to pop up as baddies in the next Disney flick, but Twomey’s film deals with many a complicated issue with a heavy dose of sensitivity, without deflecting from the actual facts. But the one you should come away with more than most, is that women in this day and age shouldn’t be treated as third rate citizens. It’s astounding that is indeed still the case for so many around the globe, but there you have it.

At least this film does its part in both entertaining and educating, and you can’t ask for more than that.

The Breadwinner may not have the backing of a huge Hollywood studio, but it doesn’t make it any less remarkable. As the film promotes throughout, you can’t beat the power of storytelling.