As far as the myriad of Marvel characters are concerned, Thor has been on some journey. Obviously all of them have been on journeys, otherwise there wouldn’t be films about them, but certainly the God of Thunder’s has been transformative, to say the least.

He made his debut in the 2011 film Thor, which was quite a dramatic storyline, so it was fitting that Sir Ken of Branagh directed it. Since then, Thor has loosened up considerably, especially under the directorialship of Taika Waititi, who helmed the previous Thor Ragnarok, and its sequel here.

And this instalment makes the son of Odin as about as loose as an Avenger can get. 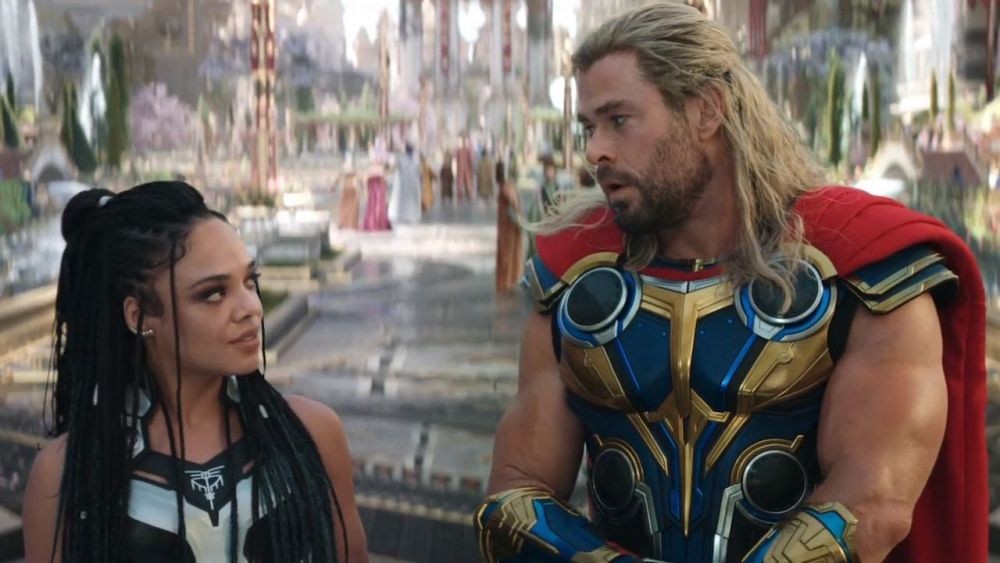 Travelling in the far reaches of space is Thor (Chris Hemsworth). He is not alone however, as he has teamed up with those Guardians of the Galaxy, protecting those in peril.

An alert comes in from a familiar face, Sif (Jaimie Alexander), who is in desperate need of help. Thor decides he’ll take this one alone, as it’s personal, and heads out with his trusty weapon Stormbreaker.

When he finds Sif, injured from battle, she tells him of a new dastardly foe, Gorr (Christian Bale), who has been given the ability to kill gods, which isn’t great news, especially for Thor.

He sounds particularly tricky, so he decides he’s going to need to some help, which includes King Valkyrie (Tessa Thompson), but also the unlikeliest form of his ex girlfriend Jane Foster (Natalie Portman); she isn’t just Jane however, thanks to Thor, unknowingly, she has become super, and is more than capable of standing by Thor’s side, which is just as well, because it appears that Gorr means business, and he’s going to need all the help he can get. 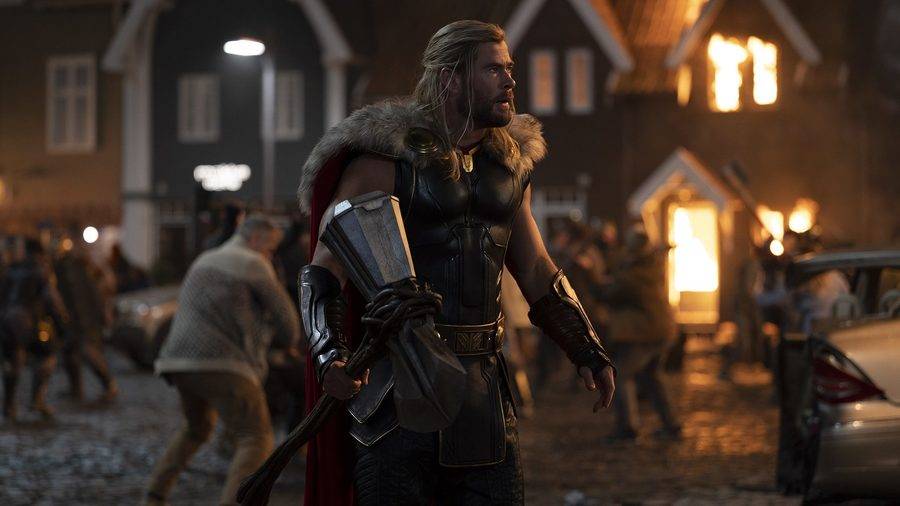 Now don't panic everyone, as you can see, I have the perfect tool for the job.

With this film you can tell that Waititi is keen to push the boundaries of what constitutes a Marvel flick in general, and a Marvel superhero specifically. Certainly his interpretation of the comic book version of Thor is wildly different from his own. It could be said that traditionally Thor has been one of the more serious members of the Marvel realm. Whereas here, his comic shtick is almost tantamount to an audition for a stand up act. Hemsworth fully embraces the gear change, and is hugely successful in its execution.

And yet the story is still a gripping one; a character created to simply trouble the Gods with the threat of their demise. Bale, who is seemingly the 243rd British actor to take on a role in the MCU – which may well have to be change to MBCU if it continues – also appears to be having a ball, dressed as he is as a sort of cross between Nosferatu and Ghandi, playing Gorr.

But ultimately it’s a film about relationships. There’s the relationship that Thor has with Jane, which is treated on a similar level to a rom-com, then you have the relationship he has with his fellow gods, specifically his idol Zeus, wickedly played for laughs by Russell Crowe. The main one however, is the love triangle he finds himself in between his weapons Stormbreaker and Mjolner – his mighty hammer, now in the hands of another; it gets silly, and yet there’s an underlying affection that he has for both, that is undeniable.

There’s also an unusual subtext of being anti-religious. Gorr is, after all known as the God butcher, and his primary goal is to rid the universes of them all, as they have proven to be useless in his eyes. Even Thor loses faith in his idol Zeus, as his behaviour to him is utterly un-god like.

This all wrapped up in a some classic rock anthems, supplied by none other than the Guns N’ Roses; their inclusion is a bit of a mystery, making more sense if it was an out and out Guardians of the Galaxy film, but Thor gets off on Axl, Slash and co, apparently. Maybe his time hanging out with music fan Peter Quill (Chris Pine) was more influential than any of us realised.

Although some may be concerned with the humorous direction Thor has taken under Waititi, there’s a case that making Thor more human is no bad thing. Ultimately all the Marvel characters were created to entertain, and boy, does Thor put on a real show here.

Much like one of the themes of the film itself, it’s all done out of love, and surely that’s something all of us in the world could do with right about now.

Just don’t be surprised to see Thor in his next outing lose all his powers, and ending up in an office job, where he falls for his boss, who sees him as a klutz, and hilarity ensues. Because you know that’s the kind of thing that deviant Waititi has up his sleeves, so be warned Marvel fans.

Until then, just worship at the feet of Thor, who is turning out to be a real marvel.