The world of animation can be a hit or miss affair, even for such giants of the industry such as Disney and Pixar. A recent example of being way off the mark is DreamWorks’ Spirit Untamed, which was lame in every way possible.

But that doesn’t stop some studios from pushing themselves; Sony Pictures Animation have produced a varied number of titles over the years, including the Open Season franchise, Cloudy With a Chance of Meatballs films, and the Oscar-winning Spider-Man: Into the Spiderverse.

For their latest feature they’re producing something they have yet to do, a musical. And they’re not doing it quietly either, as they’ve only recruited Lin-Manuel Miranda to not only star in it, but to also write the music.

I bought it on eBay, isn't it cute!

Performing in a plaza in Havana, Cuba, are musician Andrés (Juan de Marcos González) and his performing pal Vivo (Miranda), a cute kinkajou otherwise known as a honey bear, originally from the Amazon.

They spend the days busking in the plaza, performing songs to the locals, and generally enjoying life. Things change however, when Andrés receives a letter out of the blue from Marta (Gloria Estefan); she used to perform with Andrés in Cuba, where they grew very close, before she left to pursue a singing career in the US.

Now a star there, she’s writing to Andrés to see if he’ll attend her final farewell show in Miami. This could finally give Andrés the opportunity for him to tell her how he really feels. In fact, it would be the perfect time to give her the last song he ever wrote, a love song to her, which he has held on to for all these years.

Although he had every intention of going, with Vivo, he never sadly made it. This makes Vivo think that he needs to continue the mission, and make his way to Miami to hand over the song to Marta. He couldn’t manage such a feat alone however, and it’s just as well that Gabi (Ynairaly Simo), a young relative of Andrés’ is on hand to help.

Together they manage to leave Cuba behind and arrive in Florida, but with over a 100 miles to Miami, the pair have a lot of ground to cover in very little time, if they are to make Marta’s farewell gig. 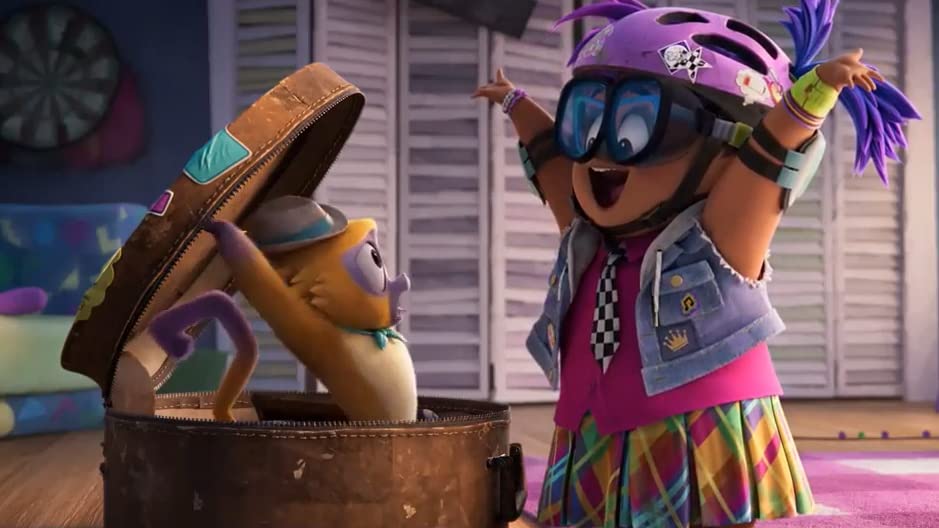 let me tell you again, I'm not your mail order groom!

Certainly if you’re going to make your first musical animation, getting flavour of the musical year Miranda involved is a positive move. Although his musical credits sing for themselves, Miranda does exceptionally well voicing the loveable Vivo; he gives him a grounded personality, and of course when he bursts into song, he does it with some style.

In fact the musical numbers throughout are truly impressive, so much so that they manage to put the recent In the Heights dull tunes to shame, which is ironic when you consider that it’s also one of Miranda’s musicals. One of the stand out tracks has to be ‘My Own Drum’, sung by Simo, which is as infectious as Covid, with its rocking beats and bad bars.

Thankfully the animation is up to scratch too; it captures the vibrant colours and warmth of both Havana and Miami beautifully, and even plays around with the art style occasionally to good effect.

And holding it all together is a tight and entertaining script. The characters are rich and flamboyant, and the journey they take is fun and exciting, making it a delight from start to finish.

It also tackles the notion of loss, in quite a sensitive and touching way, making it more than just a standard animated flick. Vivo then is a joyous, vibrant experience, that is also warmly heartfelt, that will leave you feeling suitable upbeat, with a song or three in your heart.