Up until now, director Jacques Audiard has helmed projects in his native French, including such titles as 2009’s A Prophet and 2012’s Rust and Bone.

For his latest, he heads west – way out west – for his first film in English, with some Hollywood hotshots along for the ride. 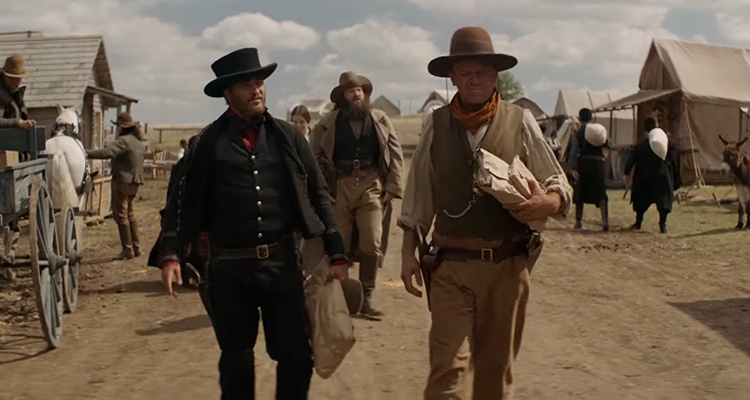 This packaging from Amazon is getting really shoddy.

1851 and savvy prospector Hermann Warm (Riz Ahmed) is heading to California to join the gold rush. On the way, his path crosses that of John Morris (Jake Gyllenhaal) and after some time in each other’s company, they become friends. Or so Warm thinks. Unbeknownst to him, Morris has a hidden agenda; he’s a private detective who has been sent out by the Commodore (Rutger Hauer), a wealthy businessman that Warm owes a debt too.

Warm is also unaware that there are hit men on his tail, also hired by the Commodore, known as the Sisters brothers. Eli (John C. Reilly) and Charlie (Joaquin Phoenix) Sisters are building up an impressive reputation for getting their man, and aren’t that far behind their target.

The situation changes somewhat when Morris decides that Warm, with his intriguing chemical formula for making it easier to discover the gold, is worth more alive than dead. The pair head off west together, but they haven’t done enough to shake the Sisters brothers off, who are now even more determined to get their man.

Now, how do I look in this hat again?!

There’s really nothing quite like a western; it’s panoramic vistas and dusty scenery, filled with galloping horses and drawn out gunfights. Audiard is clearly a fan of the genre, as it’s beautifully represented on screen here.

Here’s the clever bit though; despite being a Western, it’s actually more southerly - to his home of France at least - as it was shot in Spain. So technically a Spaghetti western then – or should that be a Paella western?

It’s also not your typical Western in terms of its script. Although there are recognisable elements on show (galloping horses? Check. Gunfights? Check), at its heart is a film about relationships. Not only is there the obvious sibling relationship, which is quite complex in itself, but also the growing relationship between Warm and Morris. Out of conflict, a warm friendship blossoms, which is quite endearing to witness.

As the film steers itself away from the conventional Western, what remains is very Coen-esque. So much so that it’s probably the Western the sibling filmmakers should have made, instead of their soulless True Grit re-make.

And although Reilly, who has done his fair share of comedies (such as Cedar Rapids, and the more recent Holmes & Watson and Ralph Breaks the Internet) stars, and the film itself is described as a comedy, it isn’t that kind of funny. Much like its arid landscape, the humour is on the dry side.

It’s also not the most action-packed Western you’re likely to see, with set pieces very few and far between.

What it is however, is a sweet, tender and even slightly moving observational piece about the bond between brothers Sisters.

Admittedly it’s an odd combination, that of Reilly and Phoenix, but it works remarkably well. So much so that if the pair returned for The Sisters Brothers Ride Again! it would be a journey worth saddling up for.